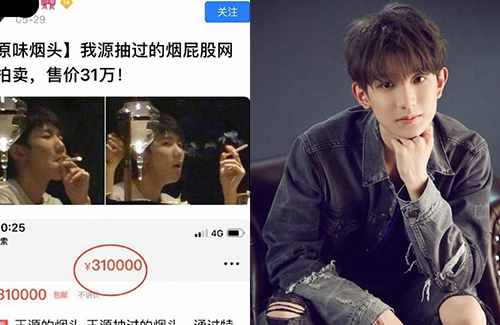 Roy Wang (王源), member of popular Chinese boy band TFBOYS, got into controversy last month when he was caught smoking illegally inside a Japanese restaurant in Beijing.

As one of China’s most “socially responsible” young idols, the scandal caused a huge social media meltdown, prompting the 18-year-old to immediately release an apology statement.

But it’s not over yet—recently, a netizen has been auctioning a used cigarette bud claiming that it was smoked by Roy Wang with a starting price of 310,000 yuan. The netizen is also welcoming buyers to “test its DNA” for authenticity.

Despite the controversial sale, it has attracted many potential buyers.