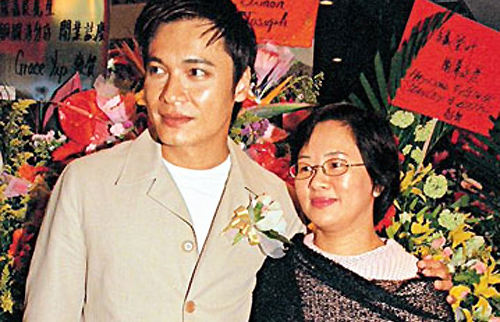 Above: Gallen Lo and Clare Fong were married for ten years before divorcing in 2008.

Clare Fong (方敏儀) quickly came to Gallen Lo’s (羅嘉良) defense when a tabloid magazine accused her ex-husband for neglecting responsibility in the funeral arrangements of his father, who passed away in early April.  The death of Gallen’s father occurred one week before the birth of Gallen’s daughter, Sela, from his second marriage with mainland actress Sophie Su (蘇岩). Gallen was blasted for being absent from his own father’s wake, while celebrating his daughter’s birth happily.

“When [Gallen’s] own grandfather passed away, his father was not present at his wake due to work. Gallen was given the responsibility to oversee the necessary funeral arrangements himself. The same situation is happening now. Gallen could not attend his father’s wake because he had work obligations. His family understands,” said Clare.

She blasted the tabloid’s claims and told the press that Gallen is “as filial as one can be.” She said, “By Lunar New Year, his father had already been staying at the Hong Kong Baptist Hospital for over a month. After his conditions improved, he was transferred to a public hospital as a stepping stone for him to enter a sanatorium. Before the arrangements came through, he suddenly passed away. The medical bill at Hong Kong Baptist was $700,000 HKD, and it all came out of Gallen’s pocket.”

Clare was flabbergasted at the reports that accused Gallen for blackmailing Clare $6,000 HKD a month in her alimony so she could “pretend” to be friends with Gallen’s current wife, Sophie Su (苏岩). “Absolutely ridiculous! Our son is going into high school now and tuition is expensive. He took the liberty to increase my alimony.” Clare declined to elaborate how much more Gallen had paid her, but said, “He just had a daughter so there would be more expenses on his part. He is trying.”

Married for ten years, Gallen and Clare separated in 2008. They have a 14-year-old son, Yu Shing.

Clare said that she has learned to let things go over the years. Although their love is over, they still care about each other. Maintaining a good relationship is also best for their son.