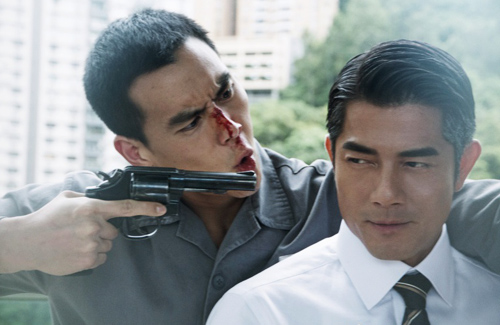 When Cold War was first released in 2012, it received rave responses – achieving box office results of nearly $5.7 million USD in Hong Kong. It also garnered nine awards at the 2013 Hong Kong Film Awards 2013, including Best Actor, Best Director, and Best Film awards). The audience loved the cast’s acting, as well as the novel storyline, which touched on the disastrous consequences of politics and in-fighting within the police force.

The film, however, ended on a cliffhanger and left the audience with several questions: for instance, who was the person manipulating all the strings behind the scenes, and where did the missing emergency vehicle disappear to? Many are hoping that Cold War 2 will finally resolve all the unanswered questions.

Excited to start filming, Aaron, Tony Leung and Eddie have already been playfully exchanging photos and banter with each other on their respective Weibo pages.

Eddie’s excitement was once again evident at the commencement ceremony recently held for Cold War 2, where he continuously greeted old friends. Eddie first embraced Tony Leung and started taking selfies with him where they both made faces and stuck their tongues out. Eddie next ran over to excitedly “reunite” with his idol, Aaron. Eddie then went up to Tony Yeung, whom he was already good friends with, and welcomed Tony Yeung with a mock gun battle. Eddie chirped, “[Tony Yeung and I] are the most handsome killers from Taiwan!”