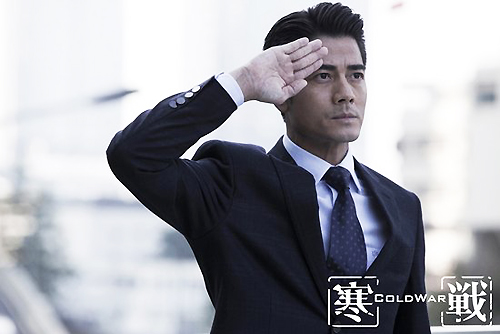 Crime thriller film, Cold War <寒战>, has been nominated as the opening film at the 17th Busan International Film Festival from October 4 to October 13,  2012.  Held annually in South Korea, the Busan International Film Festival is one of the most significant film festivals in Asia. This is also the first Hong Kong film to be nominated as the opening film.

Many Hong Kong crime thriller films have not been able to replicate the remarkable success of 2002’s Internal Affairs <无间道>. Starring Aaron Kwok (郭富城), Tony Leung (梁家辉), and Andy Lau (刘德华), Cold War revolves around the gripping plot of the police and thieves outwitting each other in a hostage crisis.

Film directors, Longman Leung (梁乐民) and Sunny Luk (陆剑青) were pleasantly surprised by the news and were not aware of the nomination until a few days ago.

Upon hearing the nomination news at upcoming Busan International Film Festival, both Aaron Kwok and Tony Leung expressed that it was a new beginning, allowing more people to focus their attention on the film.

Andy Lau’s role in Cold War has been kept in mystery by the directors and the cast. It is finally revealed that although Andy is only a guest star, he will act as a Secretary for Security, who oversees the fire, police, and the security departments. After playing various police roles for many years, this will be the highest ranking officer role for Andy!

Aaron Kwok will portray a reserved Chief Executive, while Tony Leung–who usually played a refined man–will act as the Operations Chief. In the film, the two superstars will have a quarrelling scene which last more than a minute.

As Tony rushed back from Beijing, he was not at his optimal condition while filming the scene. However, Aaron revealed that they shared good chemistry in the scene, praising Tony, “Because he is the best movie king!”

While promoting Cold War, Tony jokingly said, “If the box office results surpass the expectation, I will go for plastic surgery! I can change a new appearance and act many different characters to give viewers a refreshing experience.”

Tony then turned around and said to Aaron, “Let’s go for double eyelid surgery.”

Cold War will be slated to premier on October 18, 2012 in Hong Kong and China.