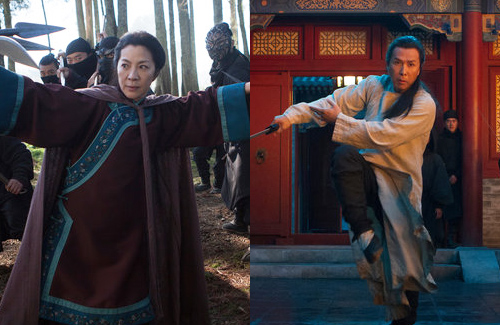 Like its predecessor, Sword of Destiny draws its story from a novel by writer Wang Dulu (王度廬). In this newest installment, Yu Xiulian (Michelle Yeoh 楊紫瓊) returns to the martial arts world when Dai Yanwang (Jason Scott Lee) attempts to steal the Green Destiny, the ancient sword featured in the first film. In order to protect the sword, Yu Xiulian joins hands with her old friend and possibly old flame, Meng Sizhao (Donnie Yen甄子丹).

Sword of Destiny is directed by Yuen Woo Ping (袁和平), who helmed the action choreography in the first movie. As expected, the fighting scenes in the released trailer flow smoothly and naturally. However, the choice of background music – a digital remix of Creedence Clearwater Revival’s “Bad Moon Rising” – can be jarring at times.

The trailer becomes even more stilted when Yu Xiulian begins her narration, since her dialogue is entirely in English. Because the movie is expected to be released in mainland China on Feburary 8, it is possible that both Chinese-language and English-language versions of the film will be available.

Sword of Destiny will be released in select IMAX theaters in North America on February 26. It will also feature a simultaneous release on Netflix, though Netflix subscribers will reportedly have to pay an additional fee in order to stream the movie.