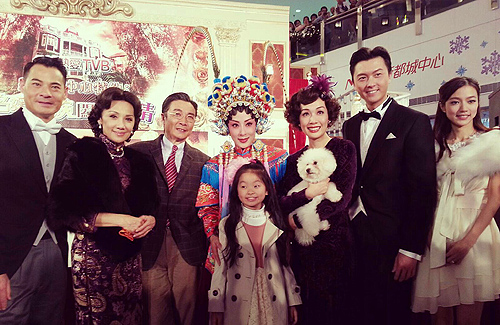 Notably absent was Idy Chan (陳玉蓮), who plays Damian’s second wife. Many cast members cried while watching the touching scenes especially during the funeral of the first wife played by Mary Hon. The scene where the second son, Jimmy (Vincent Wong 王浩信), begs for his father’s forgiveness evoked even more tears.

Sire Ma, who plays Damian’s daughter in the drama, cried from the beginning to the end while watching the final episodes.  She said, “I have such close relationships with all the cast members, so I was very emotional because those scenes triggered many great memories that I shared with them. I will really miss everyone.”

Sire’s tears caused other cast members to start crying. With her little dog on her lap, Elena had tears rolling down her face. Like a domino effect, the rest of the cast members were eventually holding tissues in their hands to wipe off their tears together.

Tavia in a Peking Opera Costume

A favorite to win this year’s TV Queen award, Tavia attracted the most attention when she appeared in her Peking opera costume. Many of her fans wanted to shake hands and take pictures of their favorite star. Afterwards, Tavia mentioned to the press that she will treat the entire cast to dinner even if she does not win the TV Queen award this year. She had no time to celebrate her winning of the Best Actress award for Astro On Demand Awards in Malaysia yet , so she will use the dinner gathering to celebrate her victory.

Tavia’s husband in the drama, Damian Lau, is also in the race for the TV King. However, he has no confidence in winning the award. Damian feels costar, Kenneth Ma, has a great chance to win this year’s TV King award instead. Standing next to Damian, Tavia laughed and said, “I am Damian’s wife and of course he will vote for me!”

As for being Damian’s son in the drama, Kenneth is not too worried about his fan base size compared to his biggest competitor, Raymond Lam (林峰). Kenneth said, “If I lose, I will try again next year. I will respect the results, winning or losing.”