Crystal Fung Has Topless Photos of Vincent Wong in Her Phone 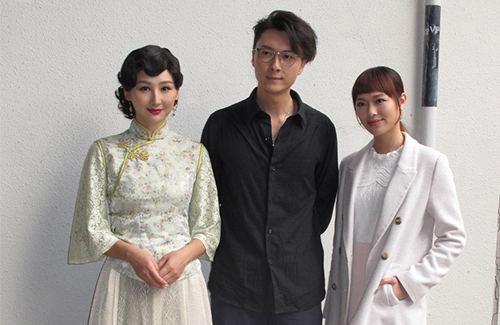 Crystal, who plays an OCTB investigator on the show, has gotten along with her cast members, sharing that Vincent has now entrusted her with the responsibility of taking topless photos for him.

“He has a few scenes where he has to take off his shirt,” she said. “He’s super fit, so I helped him take a few photos for memory’s sake. I plan on sharing those photos when we promote the drama. My eyes are lucky! Brian Chu (朱敏瀚) is also very fit.” Has her boyfriend gotten jealous of her yet? “He did discover the photos, so I had to explain it to him! I promised that I’ll delete the photos once their use is done. (Have you pushed him to also work out?) He is the genteel type, though he does have the mermaid line. His thighs are too thick, though. I used to chase a lot of stars, and my favorites are Super Junior. Every time they hold a concert I always look forward to their stripping stages!”

Vincent plays Cheung Sai-lun, a member of a theater acting troupe from Ohio, USA, who was hired by the Hong Kong police force to go undercover as a triad boss. There, he is forced to team up with Ko Sam (played by Owen Cheung), an OCTB undercover, to crack the case.

“I am the show’s comic relief,” shared Vincent. “I do have the potential to be really funny, but only close friends can feel the humor. I’ll have the audiences be the judge for that. I just hope people watch it to have a good time.”

Samantha Ko plays a popular actress who gets involved in Vincent and Owen’s case. “I’ll be soon doing a scene of my character filming a kung fu commercial, and accidentally punching Vincent in the face. I’ve been eating only eggs and potatoes recently to keep fit.”