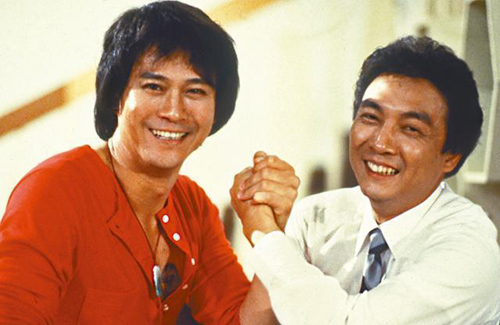 With the rebroadcast of The Greed of Man <大時代> breaking ratings records in Hong Kong, Damian Lau (劉松仁) and Adam Cheng‘s (鄭少秋) old rivalry rumors were once again brought to light. It was reported that Damian and Adam had a fallout for decades due to fighting for chances to collaborate with Liza Wang (汪明荃).

At the promotional event of TVB drama Limelight Years <華麗轉身>, Liza addressed the latest gossip. She said, “I have no idea what that’s about…whom I work with really all depends on the company.” Swiftly changing the subject, Liza added, “I’ve worked with Damian several times in the past and we’ve always produced good ratings.”

On the rumors of his conflict with Adam, Damian expressed, “There’s nothing to fight over. What is there to fight over? I have already worked with Liza three times. They are stories cooked up by the reporters.”

Damian and Adam last worked together in 1992’s The Greed of Man. Damian admitted that he had rarely been in contact with Adam since then. On whether it was true that he had absented himself from the promotional event for The Greed of Man back then due to his dislike of Adam, Damian explained, “That was because I wasn’t even in Hong Kong at the time! I was in Canada and couldn’t make it for the event.” He then added that he would not be interested in reprising his role for a film version of The Greed of Man, if it were to be produced.

At the the event, the mood was boisterous as fans greeted Liza with a cake to celebrate her 49th year in the entertainment industry and their hopes for good ratings for the drama. She was exuberant as she exclaimed, “Perhaps the warm reception is because I was hardly involved in any dramas last year and my fans missed me!”