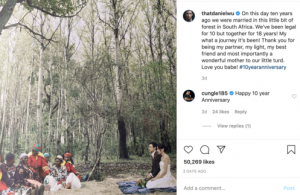 In the blink of an eye, heartthrob Daniel Wu (吳彥祖) is now 45-years old, and a few days ago, he celebrated his 10th wedding anniversary with his wife, Lisa S. The actor revealed a never-before-seen photo of his South African wedding on Instagram, and thanked his wife for her 18 years of love and companionship. Daniel married Lisa, a mixed-race supermodel, after eight years of dating in 2010. They have been residing in the United States with their six-year-old daughter Raven as a happy family of three. Surely, their love is the envy of many. 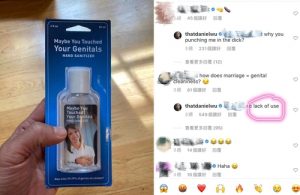 However, in mid-March, he hinted that he rarely has sex with his wife. At the time, he posted a photo of a bottle of hand sanitizer onto Instagram. Daniel said hand sanitizers are a rare commodity during the pandemic due to the lack of supplies. However, he was able to get it from Amazon. In the picture, it can be seen that the product’s slogan read, “Maybe you touched your genitals.”

In response, Daniel expressed, “But honestly being married for almost 10 years, I would say my genitals are probably the cleanest part of my body, so why I would need to sanitize after touching them?”

When a netizen doubtfully asked why marriage equated to cleanliness, Daniel responded with, “lack of use.” Perhaps Daniel was suggesting his sex life is lacking, or perhaps he was joking.