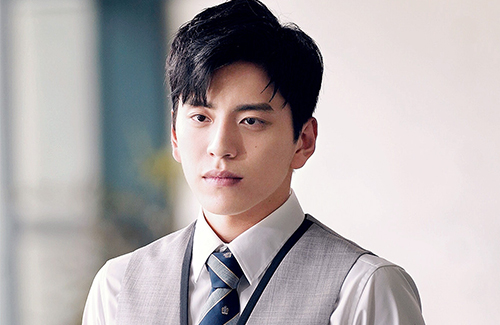 Fall in Love at First Kiss <一吻定情>, film adaptation of the manga Itazura na Kiss, had large shoes to fill. Back-to-back successful TV adaptations of the manga across Asia led fans to put the series on a pedestal, so it definitely doesn’t come to a surprise that Darren Wang (王大陸), who plays Jiang Zhishu in the film adaptation, had turned down the film three times.

The 28-year-old Taiwanese actor, who shot to fame after starring in 2015’s Our Times <我的少女時代>, originally didn’t want to do it at all. He was never interested in the original source material, and he didn’t want to take on another high schooler role, which he became known for after Our Times.

“I genuinely thought I wouldn’t have to play another high schooler role again, but after doing Our Times, I was offered to 50 different movie scripts, all asking me to play a high schooler,” said Darren. He became the epitome of that tsundere high school teenager who appears tough on the outside, but is actually really soft-hearted in the inside. 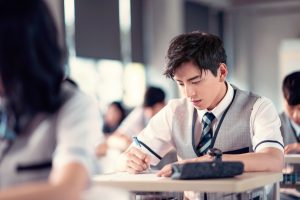 Darren may have broken out after Our Times, but his popularity actually stunted his career. “It became a label. People would definitely watch me if I play a high school student, but I really don’t want to do it again. I’m also not young anymore, and it’s tiring to do the same kind of roles.”

When he was first offered the role of Jiang Zhishu by director Chen Yu-shan (陳玉珊), Darren immediately turned it down. Jiang Zhishu is meant to be smart, extremely handsome, and with a rumored IQ of 200. He embodies perfection, and perfection was something Darren knew he was not.

“He’s too perfect,” said Darren. “And such a classical character. Many countries have adapted this manga, and honestly, I didn’t want to do it. It’s too stressful, and I don’t think I look like him. I honestly never considered myself as handsome.”

But Chen Yu-shan strongly insisted Darren play the role. She persisted—after Darren rejected the role, she offered to read through the script with him, allowing Darren to change and edit the story to his will. Darren still said no. When Darren said no a third time one year later, Chen Yu-shan told him, “You are an actor. Just because people liked your performance as Hsu Tai-yu [in Our Times] doesn’t mean you are. You need to create your own breakthrough.” To break through Hsu Tai-yu, Darren had to become Jiang Zhishu.

Darren wasn’t the only one who didn’t see himself as Jiang Zhishu. Even the film’s investors didn’t see a likeliness between him and the character, but filming still went on as planned.

“I honestly don’t care how the media writes me,” said Darren. “Nor the netizens’ comments. I have to take responsibility of myself, of this character, of my director, and the investors. Try not to have them lose too much money.”