Dicky Cheung (張衛健) and Jess Zhang (張茜) are living their lives separately for now, and it’s not because of what you think.

It’s been exactly one year since Dicky and Jess were last within each other’s vicinity. Jess is living in Beijing with her family, while Dicky is in Hong Kong with his mother. Due to the COVID-19 pandemic, Hong Kong sealed its borders with mainland China, and the couple had no choice but to quarantine from each other.

“Once Dicky left for Hong Kong, he couldn’t go back,” said a source close to the couple. “Borders were closed. Quarantine laws in place. Dicky decided to stay in Hong Kong to take care of his mother, who lives alone. He didn’t want to waste time quarantining for weeks on end whenever he travels. He also didn’t want to leave his mother behind for too long, and Jess was very understanding about it.”

The foundation of a strong marriage lies on trust. For the couple, having a mutual understanding of personal space without sacrificing trust was what made the couple 16 years strong. Physical distance would not tear them apart.

And physical distance is hardly an issue for them.

When Dicky asked Jess’s hand in marriage 16 years ago, he was a broken star. Nearly bankrupt from failed investments, Dicky couldn’t even afford an engagement ring. Jess had to purchase her own wedding gown from a second hand shop. 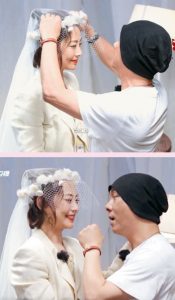 But Jess, who was already an established actress in the mainland, did not care about Dicky’s lack of money. She was in love with him, not his wealth. She agreed to marry Dicky without hesitation, even if it meant to take on these financial burdens. She promised to stand by Dicky thick and thin, through good and bad, through joy and sorrow.

Their respective experiences with grief only strengthened their relationship. In 2008, Jess suffered a miscarriage at eight months pregnant. In 2013, Dicky’s mother nearly drowned to death from a swimming accident; her heart had stopped beating for a few seconds, and she’s still learning to cope with the aftershocks. In 2014, Jess miscarried again, at seven months. Rocked by depression, Dicky and Jess found their strength again through the Catholic faith.

In 2018, Dicky’s estranged younger brother and former manager, Henry Cheung (張衛彝) passed away. As the family’s eldest, Dicky carried the solemn role of managing funeral proceedings, as well as the difficult decision of breaking the news to his mother.

It was through these different stages of grief that Dicky has learned about the fragility of life. For most of his three-decade career, Dicky worked constantly, believing that money was the most secure oath to happiness. But this wasn’t the case. No amount of money could bring back a life.

In 2017, Dicky returned to TVB to pay back his “debt.” The Learning Curve of a Warlord <大帥哥> premiered in late 2018 to resounding success, and although Dicky lost the TV King award to Joe Ma (馬德鐘) that year, the drama solidified Dicky’s household presence among the Hong Kong public.

The drama also made Dicky realize that it was time for him to finally step back for his family.

“No more dramas,” he had said. “And not just in Hong Kong, but everywhere else! I don’t want to kill more brain cells!”

Dicky now spends most of his time with his 80-year-old mother—eating brunch, dropping her off to flower arrangement classes, and raising the family cat together. If the schedule allows, Dicky would make a public appearance here and there. He would lend his voice to radios, animations, music shows, and television interviews—easy jobs that would not take out most of his time. As a Catholic, Dicky dedicates his free time to charities. Time with his family—and faith—takes precedence.

Married for 16 years, Dicky shares how he keeps his marriage fresh and why he doesn’t want to be a dad.

Married since 2004, Jess Zhang stuck by Dicky Cheung during his lowest times.

Married for 15 years, Dicky and Jess chose to have a “long-distance” marriage and live separately in different cities.

Dicky Cheung said he would have become an uncontrollable and irresponsible man if he didn’t have his faith holding him together.

Dicky describes the fear he felt as a child growing up with an abusive father.

Dicky Cheung’s gifts of properties to his wife total around $100 million HKD.