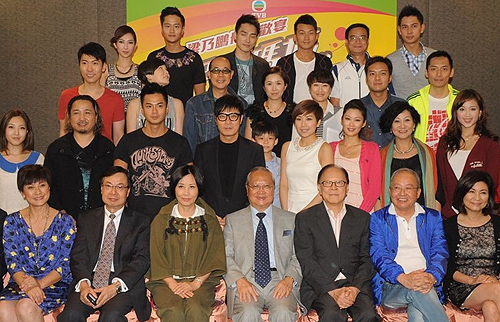 TVB Executive Deputy Chairman, Norman Leung (梁乃鹏), invited the cast of Divas in Distress <巴不得媽媽…> for a celebratory banquet on October 17. Divas in Distress is currently the third highest-rated drama of 2012, and it is known for driving actors Koo Ming Wah (古明華) and Eliza Sam (岑麗香) to stardom.

At the banquet, Norman Leung revealed his intentions on spreading TVB artists’ influence to mainland China and Taiwan. Last month, TVB spent $1.6 billion TWD on a piece of land in Taiwan’s New Taipei City to build a new filming facility for TVBS, a subsidiary of TVB that is completely based in Taiwan. Norman Leung stated, “Construction on the new site should cost about $4.5 billion TWD. The studios should be ready by 2015.”

Since its establishment in 1993, TVBS has produced seven local television dramas and numerous other entertainment programs.

Him Law Does Not Need to Sell Himself for Tavia Yeung

It was earlier reported that the TV Queen hopeful, Tavia Yeung (楊怡), managed to persuade boyfriend Him Law (羅仲謙) to sign a management contract with TVB in exchange for the Best Actress award.

Him Law clarified, “I already have an artist contract with TVB, but my management is with Filmko. There are still many years left until that contract expires.”

Asking if Him is willing to “sell himself” for Tavia, Him immediately said, “Tavia already has the qualifications for TV Queen. I don’t need to sell myself to support her.”

The starlet of Divas in Distress, Eliza Sam, disclosed that her earnings had increased to a five-figure sum due to her popularity from the drama. She also expressed her wishes in purchasing a home in Hong Kong, “I want to purchase [a flat in] Tseung Kwan O, but my colleagues say that the properties there cost at least $3 to $4 million HKD. I’ll be so happy if I can save enough money to pay for the down payment!”

Liza Wang Opens Concert After the End of the World

Liza Wang (汪明荃) is currently preparing for a concert that will be held at the end of the year. The concert is planned to run for ten days, from December 22 to 31 2012. Liza revealed, “I am actually still deciding on whether or not to make the concert a new year’s show. I will not invite guests this time. This concert will be different from my previous concerts, as the theme of my concert will focus on the recollections of my experiences in the last 45 years.”