When Donnie Yen (甄子丹) told the media that Ip Man 4: The Finale <葉問4：完結篇> would be his last kung fu film, the moviegoers panicked. Fortunately for us, the 56-year-old martial arts superstar clarified that he will still continue to do action films in the future, but did remark that it’s about time he tries something different.

“It’s been almost 12 years since Ip Man started,” he said. “It is all thanks to you all. For 12 years, viewers stayed supportive of the film. After all, it’s been a long time, and many others have also did their version of Ip Man. It’s about time we stop before we overdo it. I did tell Raymond Wong (黃百鳴) that this should be the last one. It was a good ending, everyone’s happy; it’s time to move on and create new stories. Every successful film came from a creative mind.” 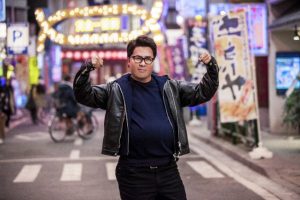 Donnie’s next major project is a father-son drama film directed by Law Chi-leung (羅志良). “It’s a pretty complicated character. I think it’s going to be challenging.”

Donnie’s Lunar New Year Film Enter the Fat Dragon <肥龍過江> was released in Hong Kong on January 23, 2020, two days before the Lunar New Year. Donnie plays Fallon, an obese cop who overcomes his 300 lb weight to fight crime across the city. Donnie spent 4 hours in the makeup chair to put on the 10 lb fat suit.

“I fought so much while wearing that suit. We shot from winter to summer. You could literally squeeze out the sweat in my suit. I actually got skinnier doing the film.”

There were several times when Donnie had to take breaks in the middle of filming to prevent getting a heat stroke. “With all that makeup and prosthetics on it was also hard to control my expressions, but it eventually came easier.”

Donnie hopes to be able to spend more time with his family in 2020. “No matter how hard you’re working, in the end, it’s all for the family,” he said. For the Lunar New Year holidays, he plans to take his kids to Los Angeles. “We’ll be there for a week. Some of it is for work. I have some meetings with a few producers.”

Like Donnie, his kids are very athletic and active. His son James has also started learning martial arts at 12 years old. “He’s learning Brazilian jiu-jitsu and taekwondo right now,” he shared. “I think he has potential. (Does he want to follow your path?) He’s still young. Right now, school is the most important. Sometimes, you don’t choose the film industry. The industry chooses you. As parents we all want our children to succeed in life, but they also need to walk their own paths.”