Dropping 30 Pounds, Chow Yun Fat is Only Skin and Bones 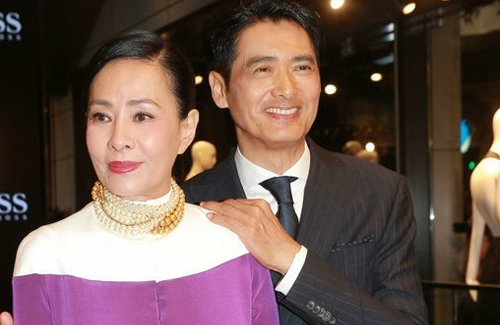 On March 28, international film star Chow Yun Fat (周潤發) attended a promotional activity for a fashion brand, looking much skinnier than usual. Rumors say that Fat Gor lost over 40 pounds in the span of a few months, but the 58-year-old clarified that it was only 30 pounds.

“It’s 30 pounds. Since shooting From Vegas to Macau <賭城風雲> last year, all that is left of me is bones! I will not get any skinnier.” Fat Gor did not specifically explain why he lost so much weight in the first place, but he did profess his love for food. “I love eating and I eat everything, from seafood, to meat, to veggies!”

Fat Gor said that now he has lost 30 pounds, he feels much more comfortable and healthier, joking, “I can walk faster now!” Fat Gor also has a love for hiking, and has established a routine of hiking hills every week.

It has been nearly three decades since Fat Gor last starred in a local Hong Kong film. Wong Jing’s (王晶) Lunar New Year gambling movie From Vegas to Macau, which opened in Hong Kong on January 30, was therefore considered to be Fat Gor’s reintroduction to the Hong Kong film industry.

Fat Gor praised his costar Nicholas Tse (謝霆鋒), sharing that he was one of the reasons why he agreed to take part in the film. Asked if he would want to work with Nicholas again in another film, Fat Gor explained that it would depend on Nicholas’ schedule and the film’s script. “[Nicholas] is a very picky person. Right now, he is busy flying around the world to do a food program.” Fat Gor said Nicholas had asked him if he was interested in making a guest appearance on his show, but Fat Gor’s schedule was too tight.

He said he never tried Nicholas’ cooking, and revealed that Nicholas only ate boiled eggs on set. “He doesn’t need to eat anything else. He’s a god!”

Fat Gor is currently shooting the drama film Contemporary Musical Design for Living <華麗上班族>, directed by Johnnie To (杜琪峯) and starring Sylvia Chang (張艾嘉), Eason Chan (陳奕迅), and Tang Wei (湯唯). “The costume designer told me I have to lose more fat on my cheeks. Now I can’t eat for the next ten days!” Fat Gor added with a laugh.

20 comments to Dropping 30 Pounds, Chow Yun Fat is Only Skin and Bones