Starring Eddie Cheung (張兆輝), Edwin Siu (蕭正楠), Tony Hung (洪永城), and Elaine Yiu (姚子羚), the TVB drama Of Greed and Ants <黃金有罪> takes viewers back on a nostalgic trip to the 70s and 80s, when Hong Kong was going through a period of economic resurgence, making it worthy to be named one of the Four Asian Tigers. 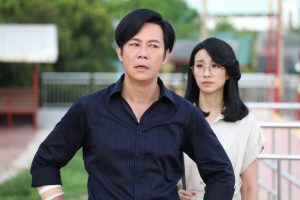 Premiering on Monday, Of Greed and Ants stars Eddie Cheung as Wing Muk-tung, an intelligent and cunning new immigrant who went from living paycheck to paycheck to owning multimillion financial holdings business. Holding onto the dream of being able to manipulate the stocks market, Eddie manipulates his friends, played by Edwin Siu and Tony Hung, to establish trust in him before establishing his own business empire.

Of Greed and Ants is one of TVB’s most anticipated television dramas of the new year for several reasons. One, Eddie portrays a sympathizing villain, an arc that he rarely gets to explore on TV. Second, the drama capitalizes on the current nostalgia trend with its eighties setting, introducing now-obsolete technology to younger audiences and rekindling fond memories for its older viewers. Of Greed and Ants is a commentary on greed, and how one life event can completely change a person, for better or for worse.