Fabienne Kwan(關楓馨) may not have placed in Miss Hong Kong 2021, but she caught the spotlight as actor Eddie Kwan‘s (關禮傑) beautiful daughter. In a televised interview with her father, Fabienne revealed she plans to sign with TVB and explore filming and hosting opportunities.

The 26-year-old had just graduated with a Master’s in Education at University College London in England before joining the pageant. As Fabienne and her younger sister Franziska (關楓盈) both studied abroad, Eddie expressed it was a rare occasion that they are all home this year to celebrate the Mid-Autumn Festival. He reminisced that he and his wife Anna Leung (梁安娜) surprised Fabienne one year, by secretly flying to England with snow skin mooncakes that were not available for sale in England yet.

Father and Daughter are Both Vegetarians

Aside from looking physically alike, both Eddie and Fabienne are vegetarian. Fabienne revealed why she became a vegetarian for almost six years, “In the past, I always felt really full and uncomfortable after eating out. Many people in England are vegetarians and once I tried it, I realized it wasn’t a difficult change. I watched many documentaries where I learned that being vegetarian would be helpful for climate change and animal rights.”

Like many people who initially become vegetarians, Fabienne felt there were very few vegetarian options. “At that time, there were very little soy products overseas so I could only eat vegetables, beans, and potatoes. Now there are a lot more options.”

Eddie has followed his daughter’s lead and has also become a vegetarian. “I wasn’t used to it at first, and I felt weak because I was accustomed to eating meat. At that time, I was filming My Ages Apart <誇世代> and felt tired. Afterwards, my daughter told me that I had to eat more soy products and more variety of foods. I slowly adapted and felt that my energy levels returned to normal, so I continued with this lifestyle.”

Hoping to offer healthier options for locals, Fabienne founded her own vegan dessert business, “Hong Kong has a lot more vegetarian options in recent years, but there are still not many places for vegan desserts. I know most of the public are not keen on desserts that have no eggs or dairy, so I wanted to change their opinions with my desserts!” Eddie joked that he has been Fabienne’s guinea pig countless times, and has helped her financially with the business. 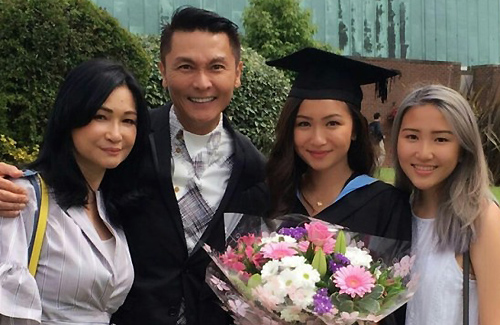 Playing a game to test their understanding of each other, Eddie was correct in guessing his daughter would like her future partner to be tall, healthy, kind, and polite. Fabienne would listen to her parents if they did not like her future partner, but believes that she would not bring home someone who is not polite.

Noting Fabienne’s maturity has grown since the pageant, Eddie said, “In the past, I felt that she had matured from studying abroad, but it was nothing compared to how quickly she matured this time. She had to face different pressures and criticism. The fact that she was able to overcome this was her biggest lesson.”

Although many celebrities are cautious to have their children enter the entertainment industry due to its complexities, Eddie remains open minded. He hopes Fabienne remains aware of her self-cultivation, image, as well as ethics and punctuality as an artiste.

A prolific actor for four decades, Eddie plays an ex-convict in the currently airing The Kwoks and What <我家無難事>. To emphasize his role as a former gangster, the costume staff especially prepared an out-of-style jacket for him to wear. Eddie frequently has scenes where he sings and plays the guitar on the rooftop, and many viewers praised his voice and are curious about the songs’ origins. The crew disclosed that the songs are original works, and the lyrics will become more meaningful later on, with the story hopefully resonating with viewers.