Despite being a hot favorite among the top 5 contestants, 26-year-old  Fabienne Kwan (關楓馨), who is actor Eddie Kwan’s (關禮傑) daughter failed to place eventually, and professed that her lack of eloquence during the Q&A segment could have been the reason. However, some netizens felt that having a body tattoo could have caused her to lose out on the crown, since winner Sabina Mendes (宋宛穎) similarly failed to impress during Q&A, but still managed to win.

Asked about her tattoo previously, Fabienne shared that she has had the tattoo for a very long time, adding it does not have any special meaning and that she has no plans to erase it. As she already sees her tattoo as a part of her body, she will only accept it affects her winning chances.

As for Eddie, he responded when interviewed at a recent promotional event for upcoming drama The Kwoks or What <我家無難事>. “As her father, if she won it’d been an encouragement, if she didn’t it is also a growing [experience]….at that time I was a little disappointed of course, but not now,” He added that the pageant was a good learning experience for Fabienne: “If life were so smooth, it’d be easier to fall when you encounter setbacks and failures in future, [so] this is rather a good thing,”

As for speculation that his daughter had not placed in the top three due to her tattoo, Eddie begged to differ and felt that times have changed, and tattoos are considered a “form of art”. Referring to the prevalence of tattoos nowadays, he replied: “Also there’re many superstars who have tattoos, so I don’t think having tattoos is a flaw, so you won’t be [labeled]  because you’ve a tattoo, I believe beauty pageants emphasize beauty and intelligence in equal parts.” 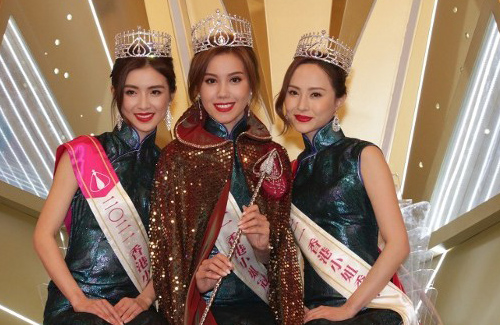