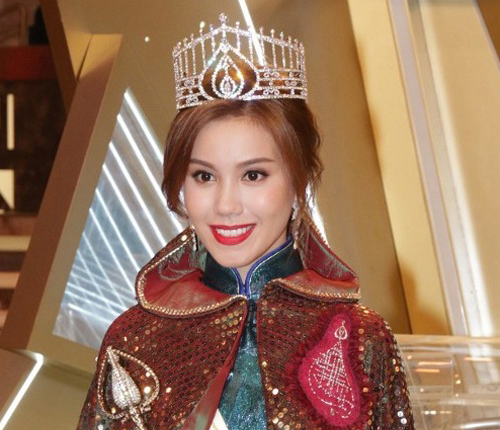 Sabina is a 22-year-old college graduate, who aspires to become a doctor. Growing up in a single-parent household, Sabina was raised by mother Man Bo Suet (文寶雪), who was also a beauty queen and won Miss Macau 1990 first runner-up. Although Sabina felt that she did not give the best response during the Q & A segment, her strength in dancing helped her overall performance. As she has been learning different genres of dance since 6 years old, Sabina is proficient in ballet, Hip Hop, and Latin dance. Originally aiming to finish in the Top Five, Sabina was shocked by the results, “I can’t believe I won!”

Placing as first runner-up, Carina was said to have looked momentarily disappointed when the results were announced. Asked if she was disappointed that she did not win the top title, the 26-year-old denied and said she was just tired. Since she is friends with Sabina and Kristy, she is happy with the results and praised both of their performances in the finals.

Winning Miss Friendship, Kristy debunked the myth that the award winner would normally not get placed in Top Three. The 27-year-old is happy that other contestants voted for her to win Miss Friendship and attributes her placement to her vitality in her performance on finals night.

A major highlight in the pageant was Jacky Cheung (張學友) performing his classic songs, and sharing the stage with Gin Lee (李幸倪) and the contestants.

After his performance, the Miss Photogenic award would be distributed, but there seemed to be a issue in scheduling and former winner Lisa Tse (謝嘉怡) did not appear on stage, with the MC’s trying to stall for time. Suddenly, the Top Five results were announced and TVB executive Eric Tsang (曾志偉) looked stern while talking to the production crew and trying to iron out the glitches.

Surprisingly, hot favorites Yvette Chan (陳聖瑜) and actor Eddie Kwan‘s (關禮傑) daughter, Fabienne Kwan (關楓馨), did not place in the pageant but the latter did reach the Top Five.