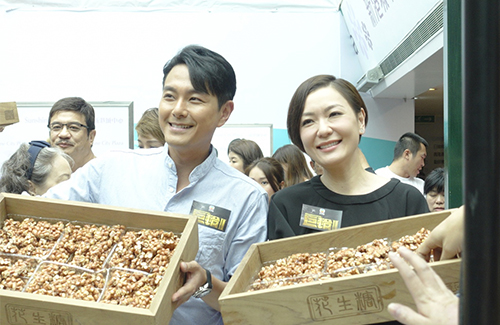 Edwin Siu (蕭正楠), Kristal Tin (田蕊妮), Ronald Law (羅鈞滿), and more attended an event in Hong Kong to promote their drama Brother’s Keeper II <巨輪II> on Sunday. The drama is a sequel to the 2013 drama of the same name, and premiered on August 29, 2016.

Brother’s Keeper II continues where the original series left off, and focuses on Edwin and Kristal’s multi chain bakery business. The cast said they are confident that the series will keep the viewers from TVB’s hit drama A Fist Within Four Walls <城寨英雄>, which ended on Sunday. Edwin said, “Before A Fist Within Four Walls there was House of Spirits <一屋老友記>, which also good ratings. I have confidence in the ratings for our series too.”

Edwin said Brother’s Keeper II has 39 episodes and will be on air for two months. “It sounds daunting but I have confidence in the series,” said Edwin. “There are new cast members so it won’t feel repetitive.”

Kristal, who won Best Actress for her role as “Yiu Man-ying” in the last series, was asked if she has the confidence to win the same award a second time around for the sequel. Kristal said, “It’s still too early to tell.”

Pointing out that her Ghost of Relativity <鬼同你OT> star Nancy Wu (胡定欣) is having strong Best Actress buzz due to her popular dramas this year, Kristal congratulated Nancy and said, “I hope she’ll continue to stay strong!”

Ronald Law, who was sentenced to community service due to a DUI, admitted to the press that TVB had put him in a hiatus and is renegotiating his contract. Ronald also did not deny the rumors that he’s dating a wealthy woman, but stressed that he will put his work before anything else.