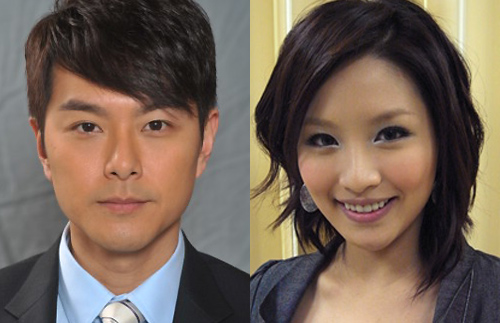 Edwin Siu (蕭正楠) has been hard at work since returning to TVB in 2008, making appearances in major productions such as The Confidant <大太監> and this month’s A Great Way to Care 2 <仁心解碼 II>. With his recent popularity and a full work schedule, Edwin was able to save up and purchased a $4.6 million HKD residence at the end of last year. Despite his successes, Edwin is still unable to win over girlfriend Gigi Ho (何傲芝) ‘s father, who thinks Edwin is too poor and not good enough for his daughter.

Edwin and Gigi’s relationship was exposed last October when their car collided with a public bus. They were later revealed to have dated for over three years and are living together. Gigi’s parents were reportedly furious at the news, and entered into a heated argument with Gigi over her relationship with Edwin.

Gigi’s father was especially bitter. A businessman well-known within the horse-racing circle, Ho Sai Gun (何世根) reportedly raised his two daughters to marry the elite. Since they were young, Gigi and younger sister, actress Lily Ho (何傲兒), spent much time at the race tracks, mingling with the rich and famous. Influenced by her father’s love for horse racing, Gigi eventually joined ATV as a horse race commentator and wrote regular columns on race predictions.

To add further appeal to his daughters, Mr. Ho encouraged Lily to participate in the Miss Hong Kong pageant in 2007. Although losing the title, Lily successfully signed as a TVB contract artist, bringing along sister Gigi who became a regular anchor for variety news show The Scoop <東張西望>.

With her good looks and expertise in horse-racing, Gigi attracted many rich suitors. However, Gigi only had her eyes on struggling artist Edwin. Gigi’s father tried to talk her out of it, but Gigi stubbornly stood by Edwin’s side. Edwin tried to win Mr. Ho’s approval by bringing expensive gifts and taking Gigi’s family out to upscale dinners, but Mr. Ho refused to acknowledge Edwin regardless of his efforts.

As Edwin’s career gained steam in recent years, Gigi tried once again to change her father’s view but to no avail. The situation seems unlikely to change anytime soon. Mr. Ho appeared agitated at the race tracks on Sunday when reporters asked him about Edwin. The day earlier, on his 36th birthday, Edwin was seen driving Gigi to meet her father. Edwin stayed in the car the entire time and did not even step out to greet Mr. Ho.

Yesterday on the set of Rosy Business 3 <巾幗梟雄之諜血雌雄>, Edwin responded to the rumors by denying that he is living together with Gigi. “I am only good friends with Gigi. It is normal for any father to want their daughter to marry well. I’ve met uncle [Mr. Ho] at Gigi’s housewarming party. He was very friendly, and taught me a lot about horses”. When asked whether he is upset about Mr. Ho deeming him too poor for Gigi, Edwin replied, “I won’t be unhappy. I’m very happy. I’m working hard right now. Haven’t you noticed that I’ve been very focused on my work the past two years?”.