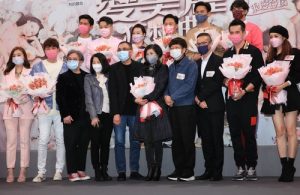 Yesterday, the cast of Beauty and the Boss <愛美麗狂想曲> (previously known as Amelia’s Rhapsody), including Ali Lee (李佳芯), Moses Chan (陳豪), Edwin Siu (蕭正楠), attended the drama’s promotional event. Moses and Ali told viewers they should look forward to a lot of funny scenes and positive energy scattered throughout the episodes.

As there are a lot of fantasies and extremities written into the plot, 38-year-old Ali said she plays 32-year-old Telford Wong’s (黃庭鋒) mom. “I was surprised when I received the script,” Ali candidly expressed.

Although she has played a mother in Who Wants a Baby? <BB來了>, this is the first time she has such a big kid. However, Ali shared, “He really felt like my son because he would act cute toward me.”

As the holidays are just right around the corner, Edwin said his Christmas wish is to be Moses’ godson. Moses laughed and said, “I previously played Charmaine Sheh (佘詩曼) and Sonija Kwok‘s (郭羨妮) dad, so I might as well be Edwin’s dad too! Actually, he has a lot of fatherly love in his eyes, so he should hurry up [and have a baby].”

Aside from Beauty and the Boss, viewers can also catch Ali in AI Rhapsody <智能AI（愛）人> in the near future, as production is about to wrap up. As for Moses, he is about to shoot Big White Duel 2 <白色 強人II>. “I have to film in Shenzhen soon, and the shooting schedule will be packed because we still have to isolate over there. I expect that I won’t be able to see my kids for a while, so I’m trying to spend more time with them now,” Moses said.

“Beauty and the Beast” Trailer: