Besides it being an all-boys party, the other highlight was the birthday cake. Edwin had specifically collaborated with Hong Kong cake designer, Jimmy, to create a cake unique for the two of them. The cake was a heart-shaped apple tree, and for special effects, it was lit with firework candles. Everyone sang happy birthday to her as she happily clapped while watching the candle sparkles.

Priscilla later posted her pictures and videos on Instagram, thanking Edwin for preparing her birthday party and their friends for making her feel like she was one of the boys. Her good friend, Albert, also uploaded a group photo and complimented Edwin for his thoughtfulness and efforts in arranging everything to make Priscilla feel happy and loved.

The photos showed the couple’s happiness. Fans praised Edwin for his attentiveness and sincerity, and wished that they’ll quickly tie the knot and have a baby soon. 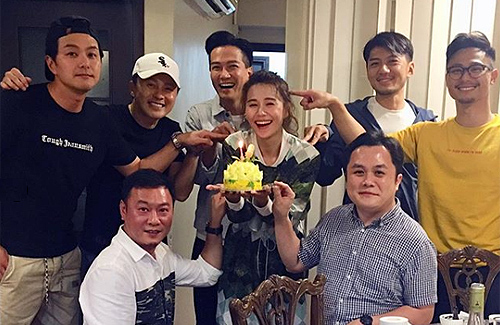