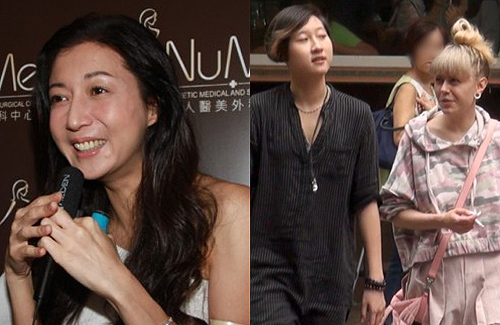 The tumultuous relationship between Elaine Ng (吳綺莉) and her daughter, Etta Ng (吳卓林), seems to have taken a turn for the better. While Etta’s suicidal tendencies are being addressed by a team of doctors and social workers, Elaine is also seeking care from a psychologist. Both mother and daughter are making efforts to mend their damaged relationship.

Recently, Elaine appeared at a promotional event with an entirely new image. Elaine said, “Not only am I changing my appearance, but I also need to improve my internal emotions. Right now, I have accepted that mood disorders do exist. I need to accept it and face it. I hope to be a good role model and also look healthier, so I can work hard. I haven’t had any work these past few months because I returned to Shanghai to take care of some property matters. Furthermore, I’ve been under a lot of pressure these past few months too. Thank you to my friends for their support. I’ve been exhausted.”

Growing up under the spotlight and branded as international superstar, Jackie Chan’s (成龍) illegitimate daughter, Etta internalized a lot of negative feelings. Spotted with more than 20 cuts on her wrist, Etta is currently on medication and being cared for by a team of medical professionals for her suicidal tendencies. Elaine said, “As a mom, seeing her child get hurt is very heartbreaking. I can’t blame her. Instead, I have to improve myself. I’m thankful that we realized this situation early on, so we still have time to mend it.”

Elaine continued, “[Etta] grew up in a single-parent household, and our situation is very peculiar. Just because I have accepted the situation doesn’t mean she can accept it. As a mother, I neglected her feelings a lot back then. It accumulated over time. It caused her to feel a lot of pressure until she finally exploded. Thanks to the help of her friends, she is learning to become stronger and calmer.”

Etta has also been extremely close to a popular female Internet star, leading to rumors that they are dating. When asked whether their conflicts arose from Etta’s friendship with the famous internet star, Elaine denied this. “Can’t blame other people. I neglected her feelings. I failed her. I apologized to her in person. They are just friends. She is 17 and is just trying to get to know people. I don’t know how it will turn out. Even if she is dating this person, it won’t be the last one.”

On whether she can accept if Etta is lesbian, Elaine said, “I’m very open-minded. It doesn’t matter. I’ll be more scared if she told me she’s pregnant and that I’ll be a grandma! Sexual orientation doesn’t matter. The most important thing is that the person can take care of my daughter, have a kind heart, and loves her.”