Last year, Elaine Yiu (姚子羚) was embroiled in a scandalous affair and labeled as the third party in businessman Raymond Young (楊偉文) and his wife Sarika Choy‘s (蔡宛珊) marriage. However, Elaine claimed that she was unaware that Raymond was still legally married to Sarika, which caused her to have trust issues in relationships. Recently, there have been speculations that Elaine reconciled with the newly divorced Raymond after they were photographed on a date. In a promotional event for her upcoming drama Stride <大步走>, Elaine addressed the allegations. 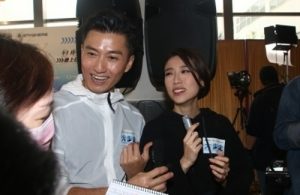 Already prepared to face the reporters, Elaine expressed that she would not be responding to romantic matters anymore. She said, “If you continue to write this, friends of the opposite gender will not have dinner with me anymore.” She continued to share that people who know her well will know what kind of a person she is. She said, “I think it is best to ask [Raymond] about further matters. I will not respond to relationship questions.”

When asked if she wanted to deal with her relationship matters privately after last time, she said, “My relationships have always been low-profile ever since I entered the industry. However, I understand it is hard to do so in this industry.”

Elaine admits that she is still waiting for the right person to appear in her life, which she will share when it happens. In the meantime, she wants to focus on her career. When asked if Raymond was Mr. Right, she said, “The right person will be the one I walk down the aisle with.” Her Stride co-star Joel Chan (陳山聰) came to her defense and shared that Elaine has never brought a significant other to their gatherings.

Aside from Elaine’s relationship status, reporters were also interested to know Elaine’s thoughts regarding good friend Nancy’s departure to Shaw Brothers and the end of her 18-year relationship with TVB. Elaine expressed her excitement for Nancy’s return to filming. When asked if she would be joining her Nonsense Club sister at Shaw Brothers, she said, “Everyone wants different things. Whether it is Shaw Brothers or TVB, we are still filming but just under a different style. I personally like TVB’s style, and there’s still a while left in my contract.”

As for Joel, who is busy filming Barrack O’Karma 2 <金宵大廈2>, he expressed that he is enjoying his time as a new dad. His son is only four months old, but he is already really heavy. He said, “I’m usually the one to carry him, given his weight. He is starting to recognize people, and just two days ago, I taught him how to play with his saliva. Every time he sees me, he plays with his saliva, so it’s like our bonding time.”