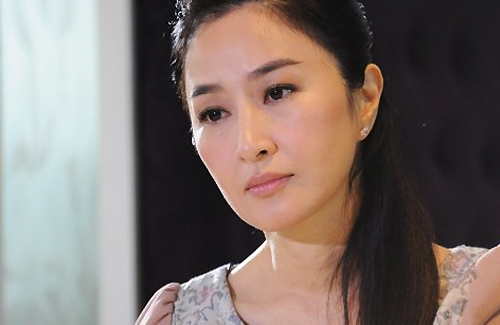 Twelve years later, TVB’s golden duo Esther Kwan (關詠荷) and Bobby Au Yeung (歐陽震華) finally reunite for the television drama Always and Ever <情逆三世緣>, a time-traveling drama currently airing on TVB Jade. Esther, a mother and a wife, semi-retired from the entertainment industry after marrying film king husband Nick Cheung (張家輝), but she returned again in 2007 to shoot the TVB sitcom, Best Selling Secrets <同事三分親>. Her daughter Brittany Cheung (張童) was not even a year old when she decided to make her television comeback.

In March 2008, a year into shooting the sitcom, Esther made the sudden announcement that she was leaving the cast of Best Selling Secrets so she could take time off to be with her daughter.

“At the time my daughter was only about one year old. I had no vacation time; I even had to work on Saturdays and Sundays, from day to night. With such long working hours, we would all eventually turn dry. The crew took care of me very well, but my daughter was always alone, and without a family member by her side to care for her. That’s why I decided to quit.”

Brittany is now 7 years old. Though Brittany is now fully capable of accepting her parents being away for work, Esther expressed that she is willing to semi-retire again for her daughter. “Can’t lose the chance to have her by my side! I need to spend more time with her, talk with her, and teach her.”

Esther expressed that her husband and her daughter always come first. While Nick was busy with filming movies, Esther stayed home to care for Brittany. After coming across the script of Always and Ever, Esther immediately gave up three months of her family time to shoot the drama.

Asked if she will film more dramas in the future, Esther said, “There was never a rule saying that both parents could not go to work. Even if I did plan out a schedule with [Nick] after I accepted Always and Ever, he still never really followed the original plan. One day when I was filming in Foshan, my daughter called and said, ‘Ay, no dad and no mom.’ On the second day when I had my day off, I immediately returned to Hong Kong to see her. She has others taking care of her, but she always misses her parents. She has no siblings, so I have to be her sister as well.

“I don’t have enough output,” Esther joked when she was once again asked if she would return to film another drama in the future. “It depends on faith and the script.”

“It wasn’t like that! [The media] made it seem so! When we are with each together, we do not consider who is the better or the worse. A relationship is a relationship. We do not talk about work-related business. In my eyes, he was a boyfriend, a husband. He’s doing so well now. He’s hardworking! He’s my pride!”

Despite their harmonious relationship, Esther expressed that she once felt as if she did not do her duty well as a wife. When Nick was in depression, she admitted that she was not there to help him, and she felt guilty. “I was taking care of our daughter at the time. When he came back home from work, he didn’t really want to start a conversation with me. When he was working in mainland, I could sense that he was feeling uncomfortable. He had a terrible temper and would do weird things. I actually didn’t know it was serious until he told me and went to see a doctor.

“He knows how to face difficulties. He knew he wasn’t feeling well, so he went to see a doctor himself. I feel guilty for overlooking him. He didn’t want to talk because he didn’t want me to worry. He thinks a lot. After all, the social scene in the film industry is much more complicated than the TV industry. The most important thing to do is to make him comfortable at home and help him rest. That is where I come in to take care of him, but honestly, I haven’t encouraged him much.”

Esther’s other pride is Always and Ever costar Bobby Au Yeung, her good friend and colleague. “He really knows how to set up an atmosphere. From stoned faces to relaxed expressions, he has the personality that can make the entire crew smile. He’s very good with people. When I work with Nick, we would argue a lot, but never with Bobby. He’s adaptable. You give him any dialogue and he can improvise on the spot. He’s very flexible and not stubborn. For someone as stubborn as myself, it’s good to meet someone who is not.”

In the middle of filming Always and Ever earlier this year, Bobby developed acute pneumonia and was hospitalized in the ICU for an entire week.

“He almost died!” said Esther. “But when I visited him, all he spoke was nonsense. That was when I knew he was back!”

Bobby’s accident reminded Esther that she must watch out and take care of her body. “It was literally a step to and back from hell for him, and that was just because he choked on his food.”

Esther’s performance as Miu Chui Fa in Lady Flower Fist <苗翠花> won her the Best Actress award at 1997’s TVB Anniversary Awards – the first ever Hong Kong TV Queen in history. As a senior, Esther definitely has the qualifications to comment on TVB’s current leading actresses.

Esther laughed, “They’re all good in their own ways. A positive quality is that they’re all taller than me! They can look good being pilots or firefighters. I really don’t know why TVB cast me as a firefighter [in Burning Flame], and I had to carry very heavy machinery with me all the time. The girls nowadays are braver. Back in the day, I would never wear just a bra!”

Esther also expressed that she supports TVB’s current voting system for the TVB Best Actor and Actress awards. She said, “It doesn’t matter. If the actor does well, the audience will support him/her. If you have good relationships with the company, you are bound to get awarded. [Managed artists] especially, but it’s hard to keep people nowadays. They can’t give you enough money, but they can give you a name. If you want to be spotted by the company, you have to have good faith with the audience. The company has the right to choose. With audience voting, it is fair. One half goes to the public, the half goes to the company. I do not disagree with this system.”