The official spin-off sequel of 2017’s fantasy hit Eternal Love <三生三世十里桃花> may have broken one billion views in just a week, but it doesn’t seem likely that it’ll attract new fans.

Eternal Love of Dream <三生三世枕上書>, also known as Three Lives, Three Worlds: The Pillow Book, stars Dilireba (迪丽热巴) as Bai Fengjiu, the only known nine-tailed red fox spirit in all the lands, who falls in love with the heavenly emperor Dong Hua, portrayed by Vengo Gao (高伟光). Both characters were already established in the 2017 series.

Much like its predecessor, Eternal Love of Dream is the token example of a Chinese xianxia series—an innocent fairy or spirit with a mysterious past falls in love with a powerful clan leader or ruler, changing his cynical views on life and their fates become forever intertwined, either to stay together or stay apart. 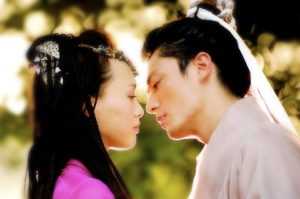 But story arcs like this are far from being unfamiliar. Eternal Love of Dream follows such a predictable story road that many netizens are saying that they can already predict what’s coming next—in their first life, they fall in love; in their second life, they reincarnate as mortal humans and rediscover their love for each other; in their third life, fate tries to tear them apart.

This road map was already done by 2009’s Chinese Paladin 3 <仙剑奇侠传三>. The Shu Sect practitioner Xu Changqing and Zixuan, a descendant of Nu Wa, had been lovers for three different lifetimes. 2017’s Eternal Love follows the same trope, but the added subplots of deception and sacrifice attracted viewers to watch on.

By the time Eternal Love of Dream aired, audiences have already lost interest of being  able to predict what happens next. Even the villains of all these xianxia series are similar—in Eternal Love of Dream, Princess Zhi He pretends to be a bride to break up Dong Hua’s wedding. This plot is similar to Ashes of Love’s Princess Suihe, who also has unrequited love for the male lead. Coincidentally, both characters are played by Wang Yifei (王一菲).

Eternal Love of Dream currently sits at a 5.6 out of 10 on China’s biggest media rating site, Douban.