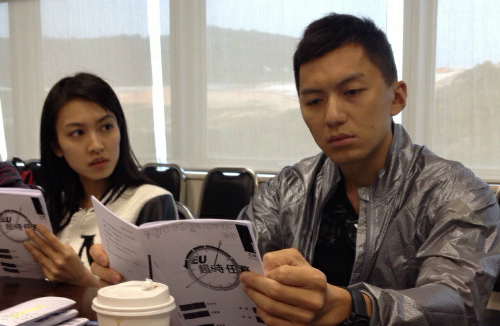 While the main plot revolves around the Hong Kong police department’s emergency unit team, there will also be a time-travelling storyline. Since Tracy is the female lead, everything centers on her character. Like many other dramas, EU: Overtime Mission features a classic triangle relationship. Tracy’s character first falls in love with Benjamin, and then Vincent.

The rooftop scene spoke of Benjamin’s character who broke the law, but left no evidence behind for Vincent and Tracy to prove him wrong. Caught between the two men, Tracy revealed that although she truly loves Vincent, she sympathizes with Benjamin and hopes to give him another chance. Vincent disapproves of her decision and was seen scolding his love-rival loudly.

Injuries were inevitable when it came to filming an action drama. Benjamin shared, “I thought filming would have been pretty simple yesterday, since all I had to do was chase after someone. But I fell over and hurt my knee.” Vincent revealed, “For one scene, I had to climb up onto a pier from the water. I didn’t expect that there would to be so many barnacles, and my hands were all scratched.”

Speaking of their costar Tracy, both Vincent and Benjamin praised her for carrying professional work ethics. Vincent remarked, “She is able to withstand working from 6 a.m. to 3 a.m. That is indeed incredible.” Benjamin added, “It’s really considered a new experience for her!”