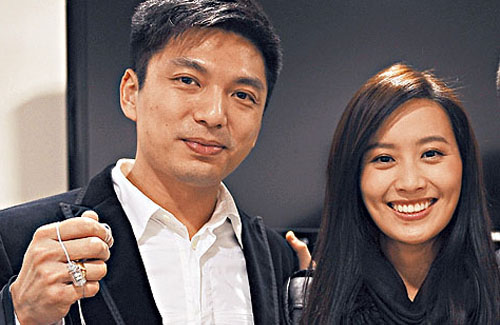 Fala and Daniel were speculated to have gotten secretly married in 2008. The pair own two properties in the United States under their joint ownership. Although Fala never confirmed the marriage, neither did she directly deny it.

According to an insider, Fala felt that getting married was one of the biggest mistakes she made in life. After separating from Daniel in 2013, Fala was full of optimism and happiness.  She remained unswayed in her decision that separation was best for them.

In the same year, Fala also left TVB and rejected signing with Kelly Chan’s (陳慧琳) manager, Claudia Chan’s (鍾珍). She hated the idea of being tied down by contracts and having little freedom over her work choices. Giving up her top status at TVB, Fala preferred to be a free agent and focus her energy on filming movies instead.

After breaking up with Daniel, Fala stayed in New York temporarily for an acting course. Returning to Hong Kong after her studies, Fala filmed Ronald Cheng’s (鄭中基) movie Mysterious Treasure <神秘寶藏>. At the time, Fala lived at the old apartment complex that she previously shared with Daniel, which he paid rent. He also continued to send his personal driver to assist and take care of Fala.

Rejecting Daniel’s eagerness to get back together, Fala ultimately moved out of the apartment and decided to permanently reside in the United States with her family again. She will only return to Hong Kong when work offers crop up. She even took the cat that she had raised with Daniel.

When Fala vacated her old apartment, Daniel took photos of the empty home and shared the photos on his Facebook, apparently unable to forget their past memories together. On his Facebook profile, Daniel also posted Fala’s photo as one of the nine people that have influenced his perspective in life.