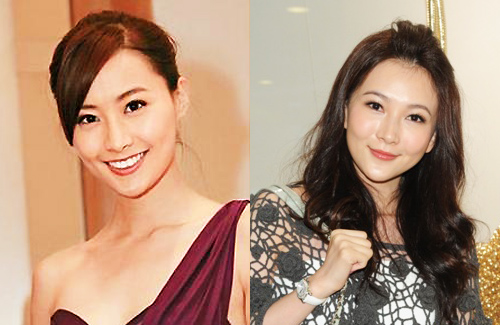 Above: Fala Chen and sister-in-law, Marie Zhuge, are rumored to be bitter rivals.

The Hong Kong paparazzi has always been interested in collecting the latest scoop on the “power struggle” between Fala Chen (陳法拉) and sister-in-law, Marie Zhuge (諸葛紫岐). Although Fala never directly admitted to marrying Sit Sai Hang (薛世恒), the couple is widely speculated to have married in 2008. Sit Sai Hang is said to have fallen favor from his father, who has reportedly appointed his younger brother, Sit Ka Leun (薛嘉麟) as Neway’s heir.

Instead of enjoying married life like Marie, Fala instead placed all her efforts in her acting career, hoping to support her husband monetarily. As a result, Fala has also fallen favor from her mother-in-law, who is eager to have grandchildren.

After tying the knot with Sit Ka Leun in March last year, Hong Kong entertainer Marie Zhuge has been actively trying for a baby. Marie indirectly confirmed her baby plans to the press at a recent press function. Well-informed of the feng shui knowledge for the upcoming Lunar New Year, Marie stated, “A snake baby is good. Next year will be the Year of the Water Snake. It is compatible with me.”

On Monday, January 14, 3 Weekly Magazine caught Marie shopping for protein and folate-rich foods in a Tsui Sha Tsui supermarket. The following day, the superstitious Marie stopped by a Buddhist shop in Yau Ma Tei to look for lucky child-bearing statues, such as the Guanyin and the laughing Buddha. It was also reported that Marie had a feng shui master visit her home, who offered her advice on how to rearrange her home décor.

Marie had once suffered a miscarriage before her marriage to the Neway heir. The 33-year-old model-actress is not willing to take any more risks in her baby plans this time. For the last few months, Marie and Sit Ka Leun took vacations in mainland China, Singapore, and the United States. Marie hopes to maintain a healthy and relaxing lifestyle, in attempts to prepare her body for a healthy pregnancy.