Falling from a hot favorite in the 2011 TVB Anniversary Awards, “Laughing Sir” Michael Tse (謝天華) ended up winning no awards the evening before. After the conclusion of the awards ceremony, Michael did not accept any press interviews, disappearing from the crowd to go home instead.

Stepping out of his car, Michael flashed a smile. Holding several bags, he explained that he had to work the following morning. Asked whether he was disappointed in the award results, Michael said, “No, I respect the competitive spirit!” Michael’s wife had prepared supper for Michael to eat at home.

After one night of rest, Michael attended a watch store opening in Mongkok. Forcing a smile, Michael appeared calm. Responding initially to reporters, Michael said that he was not disappointed in the Anniversary Award results, “This year I did not get the award; there is still next year and many years to follow!I need to be like Laughing and have an undying spirit!”

Asked again whether he was disappointed, Michael admitted, “Each person will go through such a moment, but it is necessary to quickly resume my spirits and not delve on the negative aspects. One must face the incident and do one’s best! Fala Chen (陳法拉) and I won the Best Onscreen Lover Award in Malaysia. If a similar award were distributed at the TVB Anniversary Awards, I believe that we would have received the award too! In the end, a winner is singled out. However, should the first or second runner-up not be happy?”

Although netizens nicknamed Michael as “Fruitless King” since he did not win any awards at the TVB Anniversary, Michael said that he did not mind.  Lives of Omission < 潛行狙擊> received the  Best Drama Award, so I am considered to have won 1/40th award.”

In a radio interview, Michael mentioned that some fans were upset that he did not win any awards at the TVB Anniversary. Michael had to console his fans for the upset.  Asked whether he had attempted to seek understanding of the situation from Virginia Lok (樂易玲), Michael countered, “Why do I need to understand the situation further?  Ms. Lok has already used a lot of effort. Some things you already know in your heart; not everything needs a thorough review.”

In addition, last night’s awards ceremony resulted in nine complaints filed, including protests that Michael Tse should have been awarded TV King, protests that Myolie Wu (胡杏兒) should not have received the My Favorite Female Character Award. One complaint was filed against Master of Ceremonies, Vincent Wong (王浩信), for his lisping. Appearing at a music promotional event, Raymond Lam (林峯) said that he had already sent text messages congratulating Kevin Cheng (謝天華) and Myolie Wu (胡杏兒) for their victories. Raymond indicated that he was surprised by Michael Tse’s lack of winning any awards last night.

When the reporter pointed out that Raymond Lam did not make the Top 5 Finalists in the Best Actor Category, he said, “Yes, that’s right!” (When can you regain lost ground?) “I can focus on doing my own things. I have to prepare for the release of my music album. Next year, I hope to have balanced development across all platforms!” Raymond hoped that he will be chosen for the My Favorite Male Singer Award at the year-end music awards.

At a music promotional event with Raymond Lam, Virginia Lok revealed that she had already hugged Michael Tse after the TVB Anniversary Awards ceremony. Ms. Lok said, “He was very good. He said he was not unhappy.” (Did Michael Tse cry?) “He’s Laughing Sir! Of course he will be able to handle it!”

In addition, Ms. Lok denied that Shirley Yeung had requested leave of absence. Ms. Lok said that she did not know whether Shirley was in fact getting married.

At a promotional event yesterday, Chilam Cheung (張智霖) provided words of encouragement for good friend, Michael Tse. “It is most important to participate in a competition. He can win next year!” (Did you console him?) “There is no need to! Michael is a mature actor and knows how to improve further. His movie will be released soon; perhaps he will win the Hong Kong Film Award or Golden Horse Award!” Jayne: Did Virginia Lok sacrifice Michael Tse for Kevin Cheng at the 2011 TVB Anniversary Awards? Was it necessary for the extent of Michael’s sacrifice?

I do wonder during which time frame TVB had decided to give Kevin the Best Actor Award. After his success in Bu Bu Jing Xin? 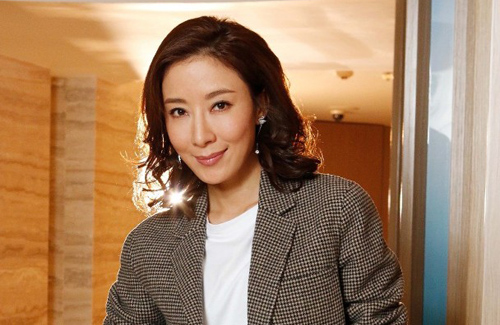