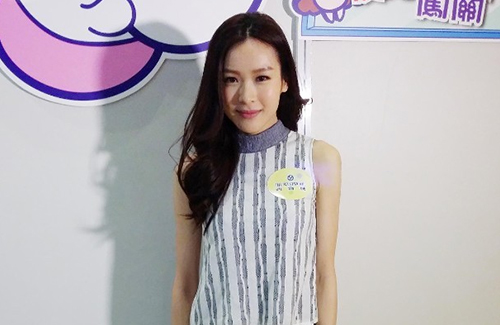 The 33-year-old, originally known for her “homewrecker” roles, enlightened viewers with her portrayal as a strong and calculative businesswoman in Fashion War, a drama series about the Hong Kong fashion industry.

“It was unexpected,” said Ali. “My character wasn’t exactly a good person, but the reactions turned out pretty positive. I’ve gotten a lot more female fans calling out my name or my character’s name. I’ve gained a new set of fans from the role.”

Asking if Ali would avoid getting cast in homewrecker roles from now on, she said, “I never choose my roles so I can have the opportunity to play a variety of different characters. I play a mother in my new series.” Ali added that she is not afraid getting typecast. “I only think about how to do the role well. I don’t think about anything else.”

Ali Congratulates Tavia and Him, Doesn’t Think Joel Chan Is Pursuing Her

Ali’s Fashion War costar Him Law (羅仲謙) secretly married Tavia Yeung (楊怡) in England last week. Ali said, “No wonder I didn’t see him during our last [Fashion War] promotion event. I’m very happy for them!” With many TVB artists getting married in recent months, would Ali consider one too? “No plans yet! Haven’t even thought about it!”

Rumors say that Ali’s other Fashion War costar, Joel Chan (陳山聰), has been trying to pursue her. “I don’t know about that,” she said. “Joel is extremely nice. We share the same manager and he is my senior. He monitors my performance and gives me many suggestions.”

Ali said she doesn’t feel like Joel is trying to pursue her at all. “We interact like how we always do. I really don’t feel it.”

The gossip claimed that Joel couldn’t get out of character and fell in love with Ali. “You’re going to have to ask him about that,” said Ali. “But we are all professionals. I think people are just thinking too much into it.”