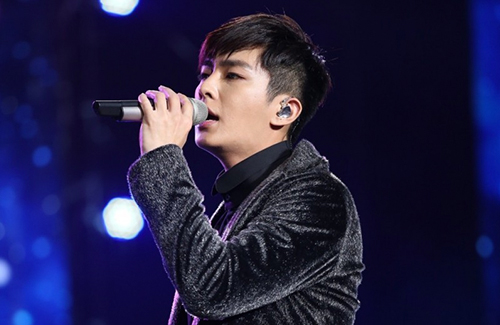 Taiwanese singer Aaron Yan (炎亞綸) faced some intense criticism after performing in the New Year countdown concerts in Kaohsiung and Taipei last year. Because he was ill, the youngest Fahrenheit (飛輪海) member was not in his best shape that night, and his less-than-stellar performances gave rise to many criticisms from netizens, attacking him for singing off-key and being an incapable singer.

Though it has already been a few weeks since the performances, Aaron may still be suffering from the backlash he received. The 30-year-old shared on his Facebook account that he is going through insomnia and has been feeling rather depressed. He wrote on January 7, “Eighth day of insomnia. Nothing left in me. Those words can really kill a person but they never realize.”

The “No Cut” <一刀不剪> singer made it clear that he is under immense stress in another status update on January 18. He wrote, “Why not be a bird, who can understand the purest love. Love is [supposed] to be pure with no boundaries. Humans [have] no comparison to any other animals on the planet.” Attached to his update was a video showing a bird mourning for its partner.

Noting his depressed behavior, many fans left encouraging comments for Aaron, assuring Aaron that he should not think with such negativity. The singer replied to his fans’ comments, but also left rather morbid messages. One fan wrote, “Don’t think like that. There are good qualities in being human. Animals also have their good qualities. The important thing here is how you choose to be a good person. Aaron, you need to add oil. Once I graduate high school I will go to Taiwan to find you.” Aaron replied, “Once you graduate and enter society, you will understand why I feel helpless.”

Another fan said, “What you really need now is love, right?” Aaron said, “I don’t think I need that. It’s just that people in this world do not believe in pure love anymore.” A fan remarked that Aaron has probably encountered some unpleasant situations in the entertainment industry. Aaron told the fan he is also concerned about the world.