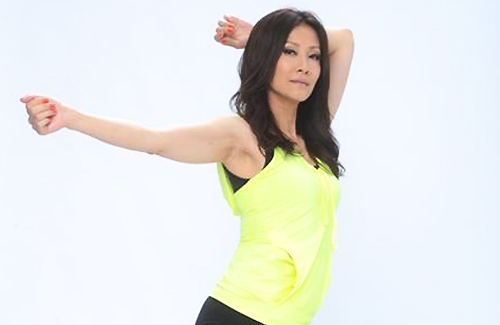 Never Dance Alone’s premiere episode achieved 25 ratings points, which is an underwhelming result. However, Eric Tsang believes the series will eventually reach wider audiences and will work on promoting the series.

Eric pulled many strings to gather the seven ladies together to star in the aerobic dance series. Although Eric stressed that all seven ladies were female leads, it has been observed that only Carmen, Rachel, and Elvina had the most screen time in the series. Various gossip reports claimed that Flora, known for portraying professional roles in the past, was unhappy that she was demoted to be just a “supporting” role in Never Dance Alone.

Flora portrays Diana, the villainous CEO of D Dance Fitness and a rival of M Club. Flora once said in an interview about her role, “In the past I’ve only been offered likeable roles. This time, my role is lonely. She has no friends.”

A source explained, “Originally the PR wanted to promote the cast separately – Carman and Rachel in one team, Angie and Elvina in another, Gloria and Fennie in a third, and Flora on her own. However, it was really hard to get a hold of Flora, and when she did pick up her phone, she said she wouldn’t be able to make it because of school. Sometimes, for convenience we would arrange for promotions at night, but Flora would give the same excuse.”

Flora did attend the grand red carpet premiere for the series on April 19. However, she skipped out in the after party and immediately left for home after the event ended.