Myolie Wu (胡杏兒), who is pregnant with her second child, is, without a doubt, a workaholic! Having just wrapped up filming for period drama The Last Cook <末代廚娘> in Hengdian, Myolie is already in England for another project. The actress and Jessica Hsuan (宣萱) were invited by Flora Chan (陳慧珊) to appear as guests on Flora’s new variety program After School <放學後>. The show is co-produced by Flora and her husband Mike Chung (鍾家鴻) in collaboration with Hong Kong Open TV, in an effort to promote a culture of continuous learning by having stars share their personal learning journeys.

The program gave Myolie the opportunity to visit Liverpool for the first time ever. Excitedly, she shared a photo of the trio on social media and wrote, “Thank you Flora and her team for bringing me to Liverpool in the UK! We are at Penny Lane now and I’m sure Beatles fans will understand the significance of this location. I’m very grateful that I get to travel with my two friends who I respect so much. We will definitely cherish these few days because this trip could be a one off and we aren’t sure if we can ever do this again!”

The reunion was not easy though. Jessica had to take off three days from her already full schedule to participate in the show while Flora was hesitant on letting Myolie travel while pregnant. However, Myolie was adamant on joining and even received blessings from her husband Philip Lee (李乘德).

The gathering of the three fadans led many fans to reminiscence the old days when the actresses were still at TVB. There are several classic dramas that Myolie collaborated with Jessica and Flora on respectively. She acted alongside Flora in Family Man <絕世好爸> and Triumph in the Skies <衝上雲霄> and worked with Jessica in Golden Faith <流金歲月> and Curse of the Royal Harem <萬鳳之王>.  Fans left excited messages, such as “Zoe and Belle are still so cool,”and “Gathering in another era!” Many hoped the actresses will be able to costar in a drama again. “Raymond Lam (林峯) returned home [to TVB], when will you guys return?” 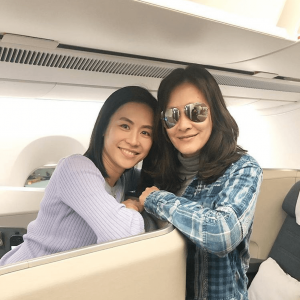 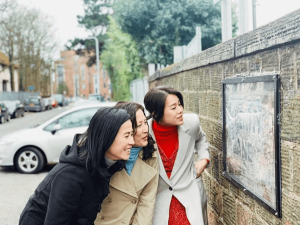 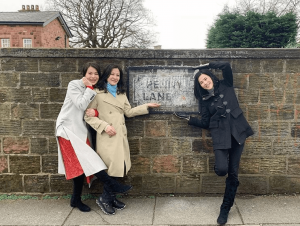