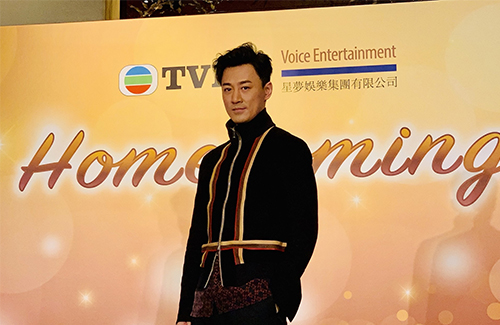 Raymond Lam (林峯) is back!

In a surprise press conference held on Sunday, Raymond Lam announced that he is officially returning to TVB and will be making his Hong Kong television drama comeback within the year.

The 39-year-old actor-singer’s last TVB drama was the hit series Line Walker <使徒行者>, which aired in 2014. He left Hong Kong to further develop his acting career in China, where he established his own production studio. The Door <六扇門> and Rule the World <獨步天下> were among some of the Chinese TV dramas he had starred in after leaving TVB.

In 2018, Raymond signed with Louis Koo’s (古天樂) management agency Sky High Entertainment. Other managed stars include Raymond’s old co-stars Charmaine Sheh (佘詩曼) and Jessica Hsuan (宣萱). It’s a sentimental reunion—Raymond’s very first collaboration with Louis was for the 2001 TVB drama A Step into the Past <尋秦記>, also the drama that skyrocketed Raymond’s career. The duo will reunite for the upcoming film P Storm <P風暴> and a film adaptation of A Step into the Past.

Though still managed by Sky High, Raymond will be making appearances in TV through TVB dramas. His return to TVB was not a sudden decision. He said, “In the past five years I’ve been consistently meeting up and hanging out with my TVB colleagues. They would always ask me when I’d return. My decision to return is stemmed from the projects that had been pitched to me. It was also fate that led me to this decision. I look forward to work with my old colleagues again. It’s exciting.”

Raymond will continue to balance his focuses on acting and music. 2020 will be Raymond’s 20th debut anniversary, and he shared his plans on doing a concert tour to commemorate it. “It’s going to be a large-scale mainland concert tour. To warm up, I’ll be holding a concert in Macau this May, and stop by a few cities in China. It’s been two years since I’ve last stepped on stage, so it’s important to warm up. We have also submitted registration papers to perform in the Hong Kong Coliseum!”

131 comments to Raymond Lam Announces His Return to TVB