Funn’s Thoughts: Raymond Cho Steals the Show in “The Confidant” 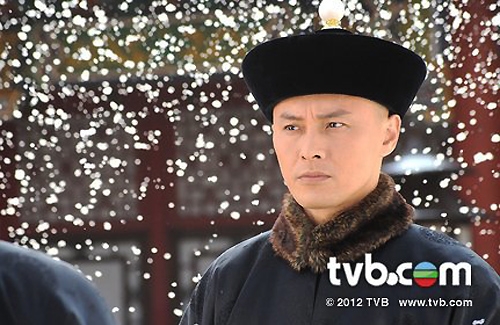 Funn’s Note: The following are not episode recaps but are ramblings and torrents of disbelief for The Confidant <大太監>. All merely personal opinion.

Why oh why is it still winter? Is this taking the whole “winter of our discontent” to a year long visual level? Why oh why is Ci’an not given a wardrobe makeover? She has been wearing that dress probably since the Emperor died!

Anyway I always thought Heshuo aka Wosek (reminder: it is supposed to be a rank and why I got Heshuo is biggest subtitle says so) is Ci’an’s daughter but she is the dead emperor’s sister and so Ci’an and even Ci’xi are both her sisters in law, which is why she can run around and do whatever she wants. At least we have less shouting in this episode. I can’t imagine in the real palace you have eunuchs, maids and even princess shouting their discontent. How to sleep if that way?!

For a frightening moment I thought my most favourite and most masculine eunuch, An De Hai (Raymond Cho-robbed off his well deserved nomination as Best Supporting Actor in the upcoming Bonus Time.. sorry… TVB Awards) was rotten when he wasn’t, I know he wasn’t the moment he stabbed Linying who fell into a pond. I mean it is only Episode 12, Linying can’t die yet, so I thought “AHA!!! Infernal Affairs!!” or double crosser of the double crosser and indeed he was!! My happiest moment. But no doubt An De Hai is ambitious, and smart and terribly cunning. Manliest Eunuch, EVER! I should never have doubted him. He never liked that Sir Fuk anyway.

I do love the comic exchange between Linying and Pang Samshun, darn funny! Pretending to be enemies but deep down they’re friends. You may ask how they turn from foes to friends? A few episodes ago Samshun was under no duty to save Linying but he did for reasons he himself also did not understand why. And since Linying is the male version of Lau Sam Ho (you know, that 3 Goods from Beyond The Realm Of Conscious … I mean Conscience), Linying likes everyone and so Linying likes Samshun! A note on Power Chan’s subtle yet excellent performance. He is so “sook gwat” (cowardly) in his mannerism, you know Samshun is not a bad guy. He is a bully but he is not a very smart bully therefore not dangerous. Sir Fuk and An De Hai’s are the dangerous ones because you don’t know what they’re thinking!

Anyway poor Prince Gong. He is truly loyal it seems, not in the “Ci’an/Sir Fuk/ one more can’t remember his name, that Prince Gong assistant who also deserves a nomination even if he looks so stressed 24/7” gang. I pity him. I am however a bit confused about the whole Ci’an/Ci’xi storyline. I mean why bother with sisterhood plot? Make it less confusing and just show one of them mad with power or madly craving for power. Ci’an in this series has only herself to blame. Everytime she is asked to make a decision, she pretends to be dumb and looks to the more forceful Ci’xi and now she is blaming Ci’xi for having too much power. In fact I am troubled by this Ci’an character. If not for Maggie Shiu, this character is a complete waste of time.

And now to the worst moment; Raymond Wong the eunuch touchy touchy with the Heshuo princess. I mean if he had been a mere young rankless doctor, at least Ci’xi can give him a high rank and she can marry him. Not quite doomed yet. This pair? Doomed from the start. He is not just a servant, he is a bloody eunuch! Oh TVB don’t go politicking with me about eunuchs deserve love and marriage. This is not the right forum. Even eunuchs and palace maids are doomed, more so princess and eunuch! Am I suppose to cry for this pair? I can’t. Because there is zero development in that storyline. Aimee Chan did ok. Her biggest hindrance is her Cantonese and the language here is so old style, it sounds a bit pretentious. But make her a mute and seriously, she looks good, acts good. I think she was at her prettiest during the titanic scene in I think episode 11? Episode 12? She looks like Christine Kuo, except less sulky.

Michelle Yim is still underwhelming for me. I read in Wiki Maggie Cheung (Hor Yee) was supposed to be Cixi although Michelle Yim was Cixi in the sales presentation clip of this series. Maggie Cheung would have changed the dynamics of this series. Michelle to me doesn’t dominate nor does she engage. She is supposed to be the most influential figure in this series filled with men, you can say she is the lead actress but I feel she is like a guest star in here.

But the last scene of this episode makes me anticipate the next episode. An De Hai may be smart but it seems Sir Fuk is smarter! I see the knife on his neck and I was like “NO!!!” and damn! Next episode we shall know. What a cliffhanger!

Between The Confidant and that Silver Sterling, Sickly Shackles, the latter is making me lose patience. The plot is like moving like snail pace and I can never understand why Sire Ma’s young miss falls for that rude pretentiously righteous cop! I mean why does it remind me of that verbally abusive relationship in Divas In Distress? You know Him Him and his Man Man? Especially when she has a good guy in the form of Stefan Wong? Because she is allergic to gentleman? She is allergic to chivalry? She is allergic to mixed race? Likewise in The Confidant but less severe. The princess is supposed to marry a really great guy, she admits that too. And yet her heart belongs to Raymond Wong who is a great guy except … Did TVB just employ Qiong Yau to write for The Confidant?! I mean why set yourself to heartbreak by falling for of all people, an eunuch? Is that supposed to make romantic drama? No! It just makes me think too much!

The Confidant is saved by performances and scenery. In fact many series have been filmed in Heng Dian but it takes this series to show to me more than just the usual buildings we see. Even BBJX did not show what The Confidant showed of Heng Dian. But the story, or one of the few stories we see in here (this series has an identity crisis!) is lame. The rest tries to be not lame but is getting to be lame. It is to me not an intelligent series but at least it is fast paced and engaging series. Just don’t think too much.

But the themesong is great! Who can outsing Shirley Kwan? Not many and I am happy a proper singer sings an actually good song. But my heart is still with the romantic The Last Steep Ascent themesong.

Anyway I am dying with anticipation as to what will happen to my An De Hai in the next episode.

This commentary is written by Funn Lim and was originally posted atwww.point2e.com.

46 comments to Funn’s Thoughts: Raymond Cho Steals the Show in “The Confidant”