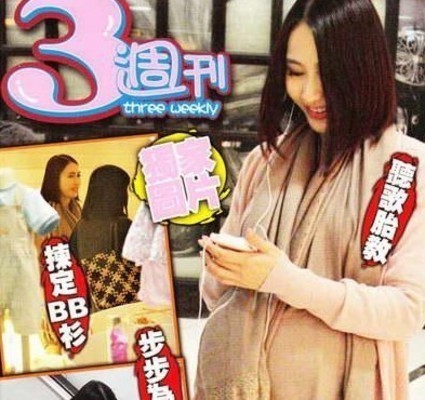 Allegedly, Gigi Lai Chi may have entered the hospital, awaiting the birth of her boy-girl twins. Gigi checked in a VIP room at a rate of $20,000 (HKD) per night to enjoy the exclusive comforts of the hospital available to its most exclusive customers.

Since announcing that she was pregnant with boy-girl twins, 39-year-old Gigi’s figure has tripled in size. Her weight may have increased to 85 kg.  An inside source revealed that Gigi’s husband, Ma Ting Keung, has reduced his work load to spend more time with her.

Several days ago, the media spotted Gigi and her maid carrying numerous bags and entering the hospital. On the second floor of the hospital, there was a noticeable increase in staff in attendance.  Reporters spoke with the nursing staff at the hospital, but were unable to confirm whether Gigi had already checked in the hospital. Meanwhile, the paparazzi waited outside Mr. Ma’s house and there was no sign of Gigi leaving the house for several days either.

Jayne: Whether Gigi truly checked in the hospital, she is likely very close to her delivery date. Looking forward to additional updates on the twins’ birth.

5 comments to Gigi Lai Enters Hospital Ready to Give Birth