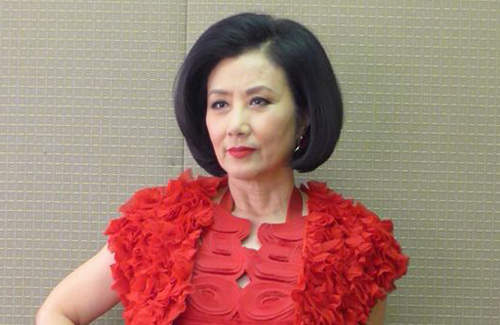 “I haven’t met her yet,” Liza said when she was asked if she knows Vanessa. Liza said that Bosco has not told her the good news yet, also saying, “Don’t think they’re at the point of seeing parents.”

Liza said she does not know if they are compatible. Asked if she felt as if their relationship came too suddenly, Liza said, “Let’s wait and see if it’s serious. They’re not at the point where they have to see me!” Liza pointed out that she was out of the country during the Lunar New Year, so Bosco did not have the opportunity to pay her a visit. Pointing out that many fans preferred Bosco’s ex-girlfriend Myolie Wu (胡杏兒), who is also very close to Liza, the veteran actress was asked for her opinion on the matter, but Liza said, “It’s better if you ask those who are involved.”

Wayne Lai (黎耀祥) was ecstatic to hear about Bosco’s new romance, and at a promotional event held in a shopping mall yesterday, he confessed that he would like to have Vanessa visit the set of their new TVB drama Double Fantasies <無雙譜>, which began shooting this week.

Admitting that he felt shocked about their dating news, Wayne expressed his happiness for the couple nonetheless. “They match well!” he said. “One is a stylish man, another is a model actress.”

Wayne does not find their nine-year age gap to be too much, expressing, “We’re in a new generation now, don’t be so old-fashioned. Age shouldn’t be a problem. When fate comes to you, you can’t stop it. Strong communication is the most important.”