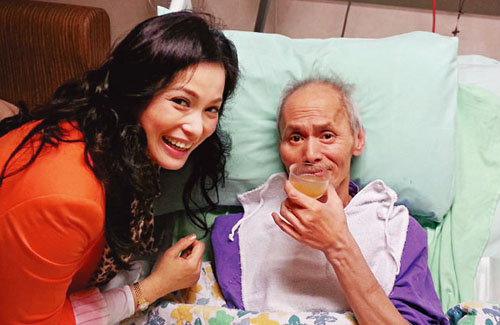 Martial arts actor, Gordon Liu (劉家輝), may have to sell his home in order to pay for his hospital bills.

Financial woes and family disagreements plagued the 57-year-old action star after he suffered a stroke in August 2011. Believing that his family only had eyes on his fortune, Gordon refused to see his wife and two children. Gordon’s former assistant, Eva Fung, also refused to return his 2 million RMB film remunerations that were left in her prior care.

The stroke, which struck the left side of Gordon’s brain, affected his language abilities and his mobility on the right side of his body. Gordon initially stayed at a sanatorium and had the strength to walk and play simple physical games. However, the outbreak of his family drama took a toll on Gordon’s health and he now has to stay hospitalized in bed. Gordon’s hospital bills cost $100,000 HKD per month.

In an interview, Gordon’s current assistant and guardian, Amy Fan (樊亦敏), revealed that Gordon may have to sell his own home to pay for his medical bills. She also disclosed that Gordon had already made a will, which was witnessed by both Amy and his lawyer.

“Gordon chose me to be his consignor because Eva used to be my assistant, so I was very familiar with Gordon’s situation. Before, there were a lot of contractual problems and Eva couldn’t handle it all. I was the one who helped out. Gordon has already arranged everything that needed to be handed down under the presence of his lawyer. I am just a witness and I will not get any benefits. I’ve been a fan of Gordon since I was very young, and I think I am doing the right thing by helping him out.”

Amy told Sudden Weekly that Gordon already used up most of his saving and has to partially rely on his social security disability benefits. With Eva still refusing to return Gordon his remunerations, Gordon may be forced to sell his 800-square-feet flat on Caine Road. Gordon purchased the property for $1 million HKD in 1992; the current market price has risen to $8 million HKD. According to the reports, Gordon’s two children – Kris and Sonia – still reside in the flat.

Amy admitted, “Gordon will not rule out the possibility of selling the flat or mortgage it to the bank. His family and children all say that they don’t have the ability to take care of him.”

She added coldly that out of Gordon’s family, only his elder sister Theresa and niece would pay visits to Gordon and show concern for his health. The rest of his family only had eyes on his money.

With the support of Amy and close friends, Gordon is slowly recovering. When the press paid him a visit, he smiled and made a ‘victory’ sign hand gesture.