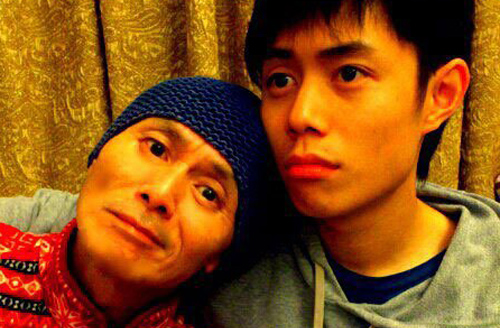 After suffering from a stroke, Gordon Liu (劉家輝) has been plagued by financial disputes with his wife and children from his second marriage. On September 7, Gordon accepted an interview and admitted that he did not wish to see his own children, turning them away at his nursing home, and acknowledged that his family members were eyeing his assets.

Two days ago, Gordon granted another interview with Ming Pao. Compared to his earlier interview, Gordon appears to be in a better spirit and put on slightly more weight. Although Gordon’s children claimed that he had an unclear mind, the reporter found that Gordon could understand the questions very well although he had to speak slowly and responded in minimal words.

When asked if he had contacted a lawyer to protect his assets, Gordon nodded his head and said, “Yes!”

As his family reportedly pressured him to transfer his assets under their names, Gordon has enlisted a lawyer to protect his assets, hoping to reserve money for his living expenses.

Gordon has two daughters from first marriage and one son and one daughter from second marriage. Asked why he chose not to see his four children, Gordon said, “Will not see (them)!” Pausing for a while, he continued, “So troublesome!”

Asked if he was handling all the family matters by himself, Gordon nodded hard, “Yes! I manage myself.”

Gordon Knows Who His True Friends Are

Since entering into a nursing home, Gordon only opened his doors to a few friends and colleagues, such as Eric Tsang (曾志偉), Bryan Leung (梁家仁), Jamie Luk (陸劍明) and Amy Fan (樊亦敏). Recently, Amy together with Gordon’s friends celebrated his 60th birthday at the nursing home. TVB also sent a fruit basket to Gordon.

Ti Lung (狄龍) also called Gordon to encourage him. Gordon reportedly was in a high spirit when talking to Ti Lung and was heard speaking loudly, “Yes! Yes!” Michelle Yim (米雪) also asked a friend to send a Lingzhi mushroom to Gordon upon hearing his condition.

Asked which friend he hoped to see, Gordon replied, “No!” When asked if he would see everyone when he recovered, he replied, “Yes!”

Gordon reportedly turned away many friends who had visited him. He would even reject answering calls from certain friends. A good friend of Gordon revealed that Gordon’s mind is still very clear despite suffering from partial paralysis after his stroke; he is able to know who his true friends are.

Gordon is also very grateful to his manager, Eva, for taking care of him during the lowest point of his life and said, “Thank you, Eva!”

After realizing that he was paralyzed on the right side of the body, Gordon reportedly fell into depression. As a martial artist, he found it hard to accept that he needed to depend on a wheelchair. Gordon’s manager, Eva, revealed that he tried to get out from his bed and his sudden movement frightened the nurses. One time, he even fell off the bed when trying to move his limbs.

Gordon now faces his physical therapy positively and wishes to recover quickly. Gordon undergoes two rehabilitation treatments a day which includes occupational therapy, training to put on his shirt and shoes by himself, and also practice his writing skills. Gordon has made tremendous improvement and can walk as many as 200 steps.

Asked if the treatment is tedious, Gordon said loudly, “It’s not tedious!” Asked if he had confidence to recover, he replied positively, “Yes!”

After Gordon sought legal assistance to protect his assets, he has been happier. While taking a photo for the reporter, Gordon also raised his thumb to reflect his positive spirit. He was also concerned if he looked good in the pictures and smiled brightly after seeing the play back.