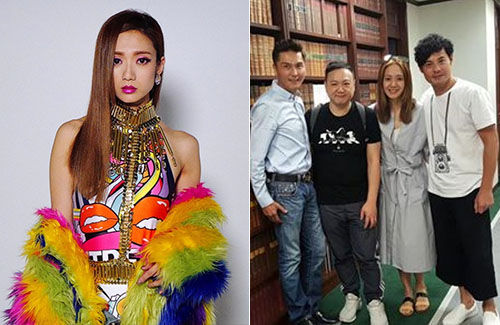 It’s been a long time coming, but the wait was well worth it.

Grace Wong (王君馨) will be starring in TVB’s It’s Like This, Your Honour <是咁的，法官閣下> as the drama’s first female lead, the first time in her ten-year acting career.

The last two years have been a whirlwind for Grace. Struggling with playing supporting roles for years, Grace’s popularity skyrocketed after starring in the uber-popular A Fist Within Four Walls <城寨英雄> in 2016, which gave her the TVB Anniversary Award for Most Popular Female Character. Grace’s following dramas—My Dearly Sinful Mind <心理追兇> and A General, A Scholar, and A Eunuch <超時空男臣>—all successfully showcased Grace’s acting range, pushing her to further relevance.

“It’s my first time playing a leading role, so of course I’m happy,” said Grace. “I’m also really looking forward to working with [Ben Wong 黃智賢] and Eddie Kwan (關禮傑). I’ve actually known Eddie for a while, as we’ve both worked together on Strictly Come Dancing <舞動奇蹟>. That show was my first big program after my debut, and Eddie really took care of me. I’m sure I’ll learn a lot from them, so I’m not too stressed out.”

Grace plays an “independent and smart” news reporter who had studied overseas. Ben Wong plays her husband, while Eddie Kwan plays her coworker. “There’s a bit of a relationship triangle going on. I’m Ben’s wife but I’m always with Eddie. It gets pretty funny.”

It’s Like This, Your Honour will be produced by Andy Chan (陳耀全), who has helmed smaller productions like Karma Rider <師父·明白了> and Swipe Tap Love <愛我請留言>. Andy’s performance as a producer has garnered mixed reviews: while there were many viewers who found his dramas relatable, some criticized his productions for not being mainstream enough.

“Let’s not talk just TVB viewers, but Hong Kong viewers in general,” said Grace. “Many people like to watch dramas like A General where you’re able to suspend disbelief, but there are also a lot who like to watch dramas that are down-to-earth. That’s why Tiger Mom Blues <親親我好媽> got good ratings. It’s good to have smaller productions like those to balance everything out. I’m not worried about ratings. What I do hope is to be able to make something that is both relatable and positive, but not something too cheesy and ridiculous. I want a show that is realistic, where every character gets to go through their own problems, and overcome them positively.”

Grace is prepared for the challenge, but being the lead means less time for her husband. “It’s true that we don’t see each other as often anymore, but that’s nothing compared to what we went through a few years ago, when we would see each other only twice a year. This is an improvement.” (You got a leading lady gig right after getting married!) “[My husband and I] really give each other good luck. It’s grace from God.”

TAGS: Ben Wong;, Eddie Kwan, Grace Wong, It's Like This Your Honour

7 comments to Grace Wong Finally Gets Her First Lead Role!