Unlike her unreasonable character as Shaun Tam’s (譚俊彥) wife in The Forgotten Day <失憶24小時>, Grace Wong (王君馨) and her husband Daniel maintain a healthy and balanced relationship. Happily married for three years, the 34-year-old described herself as being ruled by the head and not heart in real life.

“When I received the script for The Forgotten Day, I also wondered why the character seemed so unreasonable. Is there someone who would leave home after a quarrel? I felt it was childish until I had a chat with the director and producer, and realized that was exactly the role I had to play – an unreasonable and impatient wife. Because my character would disappear after the first four episodes, it was necessary for me to make a stronger impression on viewers,” Grace explained.

Although her character was unlikable, Grace did her utmost to portray the role. “I tried to immerse into the character’s world and show her most authentic side to viewers,” shared Grace, who hopes her efforts would allow audiences to understand her character and sympathize with her.

Analyzing the cause of communication breakdown in marriages, Grace opined that many husbands do not make the effort to listen to their wives, and some even pretend not to hear them. When the husbands try to show concern with a curt question and answer, their wives get even more fed up, leading the men to be even less receptive to their words. 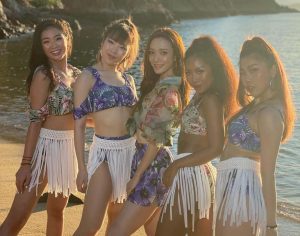 Having attended a few pre-marital counselling sessions, Grace felt that the communication styles discussed had helped the couple avoid quarrels in three years of marriage. “I need to ponder calmly about the issues I would need to face, while Daniel did not like going to bed with matters unresolved. After understanding our differences, he learned to respect me. We learned to give each other the space needed–this allowed us to slowly reduce the friction.” She added, “Both my husband and I are wise people in private and we like to settle matters reasonably in the marriage, and will talk over every issue.”

They also a consensus to let Grace focus on her music career first before starting a family. “An actor’s career journey can be extensive, and having parenthood experiences will allow my acting to mature and level up. I want to be a dancing singer, but was afraid I would not be fit enough for the grueling routine of dance choreography and rehearsals after having children. It really requires a lot of time.”

Mentally, Grace feels young enough and does not find it a problem to have children at a later age. The couple eventually wants to have two or three children.