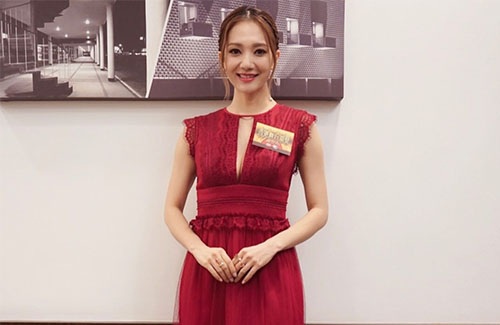 The past ten years hasn’t been easy for Grace Wong (王君馨), who made her debut through the 2007 Miss Hong Kong Pageant, where she won first runner-up. The triple-winning MHK veteran once lost her sense of direction, and turned to binge eating to calm down her stress. It was a life lesson.

“After winning Miss Hong Kong, I was immediately put into Strictly Come Dancing <舞動奇蹟> before I even started my MHK duties,” said Grace. “I thought everything would be smooth from there. Maybe God saw how prideful I was starting to get.”

In 2011, Grace hosted the food program Gourmet Secret Agent V <日日有食神V>. Grace, who was raised in New York, struggled with describing the different tastes of food in Cantonese. “I didn’t know how to use the 50 different ways to describe how delicious that fish was,” said Grace. “I don’t know how to do that even now. In the past I didn’t know what it meant to be dan ngah (bouncy on the teeth) or lyun wat (tender and smooth). It was hard. I could only describe it in my own words.”

For that, Grace’s vocabulary range was limited to only saying “very delicious” on the program, which led to criticism on her performance. “I would sound so dramatic about it. My voice was so shrill. Now, I’m learning to lower my voice when I speak.”

The stress of having to host a program was mentally exhausting, and she succumbed to binge eating. “I felt so fake. As people spoke out their criticism of me, all I could do was smile and tell them that I’ll improve next time. I wasn’t happy inside. I felt uncomfortable.”

To control her stress, she resorted to eating—a lot. “I wouldn’t eat when I’m out, but once I get back home, I would eat nonstop. I thought I could control what I eat, but the food controlled me. This lasted for about a year.”

Grace, who is naturally skinny, weighed 127 pounds that year, her heaviest weight. “At 5 foot 6, that is not a heavy weight at all, but because I’m in this industry, that’s considered fat.”

When she was brought back to her church through close friends Candice Chiu (趙希洛) and Janet Chow (周家蔚), she was able to reconnect with her spirituality and reconsider her values.

“After my debut, I was brought into such a colorful world. It really captivates you. All you see are people who are in the top of the society, and you see things you’ve never seen before. After [Gourmet], the jobs stopped coming. When you have no money, you have no friends, and you wouldn’t want to go out to socialize. If people would still be willing to help you during this time, you would know who would be there for you. It was really during that time when everything clicked to me.”

Grace shared that she once had a pretty bad breakup with Daniel, who she dated for 11 years and is now married to.

“We broke up because of his jealousy. When we were both still in America, we were already three hours apart. When I went to Hong Kong for an exchange, I met a lot of friends there, and would share the pictures I took with my male friends on social media. He would always ask me so many questions about them. Since that trust was not there anymore, how could we go on? That’s why we broke up.”

Grace did have pursuers during their breakup, but her feelings toward Daniel were special. “I always left a part of my heart for him, so I never dated anyone else.”