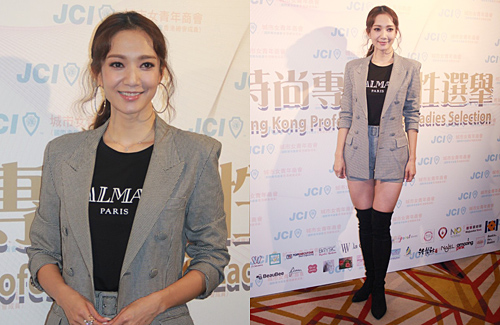 Grace Wong (王君馨) recently returned from travelling to Africa and the United States recently. One trip to share her Christian faith and one for personal pleasure, Grace spoke about her memorable experiences.

While in Africa, Grace participated in a church mission in which she encouraged the local youth to build trust with one another. “The locals have experienced tribal wars. If they don’t trust each other, then they’ll break apart. I try to bring as much love possible to encourage them to believe in God,” the 33-year-old actress said.

Afterward, the former New Yorker also went to see Jennifer Lopez’s concert in the Big Apple. However, 20 minutes into the concert, the arena experienced a major power outage. At that time, Grace only thought of ways to leave the area, but the whole street and hotel was out of power. When asked if she was worried about a possible terrorist attack, the thought had crossed her mind but Grace left her destiny in the hands of God if it was truly the time for her to go. “I could only ask myself if I have looked after and loved the people around me enough. But at that time, I could only think of ways in leaving the concert.”

Grace revealed she was going to cry if the concert took a week to start again because the ticket had cost $5500 HKD. But luckily, the show opened again in Boston two days later, and she got to see Jennifer Lopez, whom Grace praised for maintaining a fit body at 50 years of age.

Asked when she will film another drama, Grace said, “I was originally going to start filming in October, but it has now changed to December. In the meantime, I’ll train for a fitter body. I had hurt my foot during Bangkok Chinatown <唐人街>, and it still hasn’t recovered entirely yet.” When asked when she’ll have children, she expressed, “Maybe in two years’ time, or next year.”

This article is written by Minna for JayneStars.com