In 2014, Jay Chou (周杰倫) surprised the public by announcing his marriage to Hannah Quinlivan (昆凌) who is 14 years his junior. Despite the age gap, the couple has been happily married for almost four years and saw their family grow with the births of their daughter, Hathaway, and son, Romeo. The couple constantly displays their affection for each other through social media, but in a recent interview Hannah admitted that she had wanted to give up on being with Jay. There is pressure in being a superstar’s significant other. However, Jay’s persistence made it possible for the couple’s relationship to blossom into this beautiful family now.

Hannah Felt Pressure Being with Jay

As one of Taiwan’s most famous megastars, Jay’s love life has always scrutinized by the public eye. When Jay and Hannah went to Australia for vacation in 2011, their dating relationship was exposed and became a hot topic because of their immense age gap.

In an interview, Hannah recalled, “I thought it was really annoying! We’re just dating, why can’t we talk about it? Why were there so many different [opinions]? Why did they make it like us falling in love was a very wrong thing.”

In hopes of avoiding the drama, Hannah went to the United States for film school in hopes of separating herself from the relationship. However, Jay dropped all his work and flew there to find her on the third day she arrived. Hannah was very moved and knew immediately that Jay is “The One”! 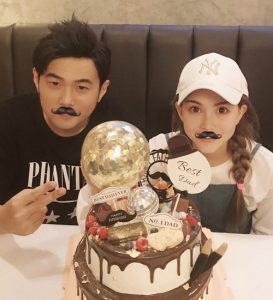 When the couple got married, Hannah was only 21 years old and her career had not peaked yet, but she expressed, “I don’t think marriage is about age. After finding the right person, I got married. In love and relationships, I don’t know what is considered right or wrong. I just know that I love him, and I’m happy. My happiness is overshadowing my sadness.”

The road in love has never been easy for anyone, but Jay and Hannah made it work. Hannah has definitely changed Jay a lot in terms of making him more happy and open. She shares, “I do a lot of random things; you can almost say I am the kindergarten captain. My husband is really childlike as well, which is good because it means he won’t mind that I haven’t matured. So basically our house has four kids, which is a kindergarten.”

Now at the age of 25, Hannah is a mother of two children, but the couple never exposes their children’s faces on social media. She hopes that her children can be themselves and grow up as their own selves instead of being known simply for having celebrity parents. The couple made their marriage work, and Jay has struck a good work-life balance.