“Highs and Lows” Cast Reveal Inside Scoop During Filming 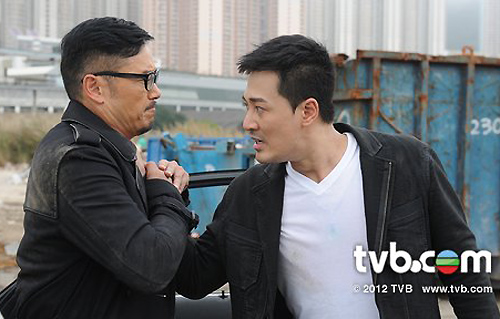 It is no question that Highs and Lows <雷霆掃毒> is one of TVB’s most anticipated and talked-about series of the year, perhaps due to the fact that Raymond Lam (林峰), TVB’s biological son, and veteran actor, Michael Miu (苗僑偉) co-lead in this dramatic and action-packed series about the Hong Kong Police’s Narcotics Bureau.

To promote the highly rated series that is currently airing, TVB Magazine asked their thoughts about the roles they played, providing an inside glimpse of the filming process.

“We seldom see TVB series revolving around drugs and narcotics, so I thought the content was very fresh.  I also admire the staff doing a lot of research for the drama in order to portray the material accurately. For example, I didn’t know that the Narcotics team had to learn how to make drugs.”

Regarding his character’s stubborn approach in relationships, Michael said, “It’s my first time working with Elaine Ng. In the series, we are divorced with a son. Although she wishes to get back together, my character didn’t want to because he knows that the lines between good and bad are blurred in his life and he didn’t want to involve them.”

“I never felt that I could star in police dramas because I’m so tall. I always felt that it is more believable when I portray a professional in the modern day, so this role was perfect for me. Although I had a few action scenes, most of my work is sitting in the office so it’s much easier compared to the other cast who had to run constantly!”

“In order to get a better understanding of my role as a drug addict, I visited a rehab center to study the behaviors of drug addicts. I remember seeing a man who looked well-educated and clean cut walk in for a cup of Mei Sa Tung. Then when he left the facility, he spit part of the drink into a plastic bag and put it away.  I later learned that addicts do that in order to save it for later when the addiction hits or sell it for money. I couldn’t believe that I witnessed it personally, it was an eye opener for me.”

“I was a little chubby when we first started filming, so I think the director purposely put me in so many running and chasing scenes so I could lose weight. This is my first time filming an action-packed drama and it’s much more difficult than filming a period drama, because you don’t have a lot of beautiful and natural surroundings to distract you. Every single punch, roll and fall was real. Luckily I had the stamina to withstand it all during filming.”

“My character’s ambition and strive for perfection led him in the wrong direction, because he kept using a lie to cover another lie. I tried my best to act out his inner struggle, but when it comes to the action scenes, that is a different story. I remember filming until 2 AM and I was exhausted from the  running. Since all the clinics were closed, I had to look for a masseuse. We’re not stuntmen after all, so the action scenes really took a toll on our bodies.”

“Filming an action series is quite difficult. There was a time where I was running so much that my thighs could no longer move! It was also my first time holding a gun and I had to learn how to pull the trigger without closing my eyes. After filming for a while and getting used to it, I started to love the thrill and excitement of filming in an action drama.”