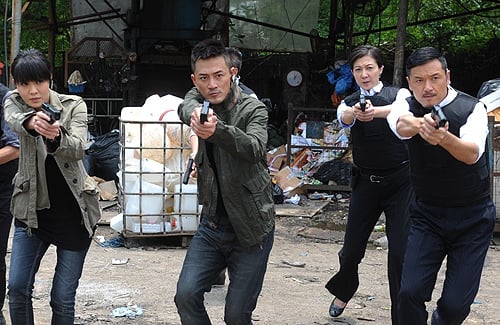 With only one week left until the two-hour Highs and Lows <雷霆掃毒> finale, fans are eager to know what will happen to our heroes and villains when the final episode airs. The following is the latest information regarding the events that will occur in the last episode.

Officers Gordon (Michael Miu 苗僑偉), Ghost (Derek Kok 郭政鴻), Chun Gor (Law Lok Lam 羅樂林), and Foo (Jazz Lam林子善) have been puppets for the mysterious and powerful drug dealer, Agent, for years. Wanting to break free from Agent’s control – and to also protect his three friends from further harm – Ghost kills Agent. The Narcotics Bureau has been doing internal investigation on his team for a while. To protect his friends, Ghost puts all the blame on himself and commits suicide.

Agent, who never shows his face, is portrayed by Ram Chiang (蔣志光). Gordon had once encountered Agent without the mask, but he was not aware that Ram Chiang’s character was Agent. Gordon believed that with Agent’s death, internal investigations will cease and he and his friends will be able to live normal lives.

However, before Agent’s death, Gordon and his friends’ illegal dealings were actually sent to Chief Inspector Brian Poon (Ben Wong 黃智賢). Brian resigns from the police force and becomes the second Agent. Unlike the first Agent, Brian is very familiar with the operations and styles of the Narcotics Bureau. Gordon and his friends find the second Agent to be much more difficult to defeat.

Brian blames Gordon and his team for ruining his career, and he is willing to reach extreme ends to have them destroyed….

The thrilling 2-hour finale of Highs and Lows to unravel on Sunday, November 4.