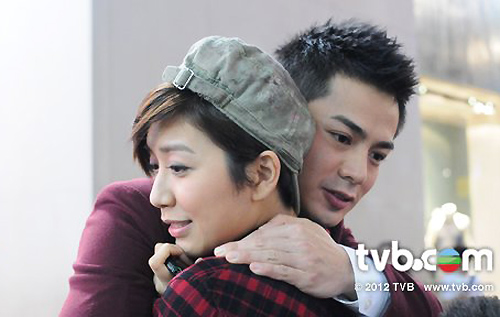 The cast of TVB comedy, Divas in Distress <巴不得媽媽…>, attended a celebratory dinner to commend the rising ratings for the drama. The average viewership rating increased to 31 points last week, averaging 1.98 million viewers per episode. Thursday’s episode also peaked to 35 points, at 2.25 million viewers. The episode also had an extremely high rate on the appreciation index, with 98%.

Eliza thanked the fans’ support and recognition, but humbly said, “Only Christine Kuo is the true Goddess!”

During the filming of Divas in Distress, Eliza was briefly rumored to be sending electric currents to costar, Chin Ka Lok (錢嘉樂). Eliza laughed in retrospect, “I’m really scared of seeing him now! I get really embarrassed!” Asked if Chin Ka Lok’s girlfriend, Angela Tong (湯盈盈), was jealous of the rumors, Eliza said that not only was Angela not jealous, she was also very supportive of Eliza, and told her to not worry too much about the rumors.

Thirty-seven-year-old Angela is currently pregnant with her first child with Chin Ka Lok. Asked if Angela is going through a period of mood swings, Chin Ka Lok joked, “Not at all! In fact, she’s always asking me if I want to eat anything so she can buy it for me! I feel like I’m the pregnant one!” Chin Ka Lok also said that he did not mind if the baby was a boy or a girl, but after a moment of thought, he said that he would prefer if it were a girl.

Him Law Naked with Mandy Wong; Koo Ming Wah is the Next Late Bloomer

Him Law (羅仲謙) and Mandy Wong’s (黃智雯) relationship in the drama is also receiving a lot of attention from viewers. He revealed that in the coming episodes, he will have a bed scene with Mandy, in which he will appear to be naked. However, he asserted that he was wearing pants when filming the scene.

Him also praised his costar, Koo Ming Wah (古明華), who portrays “So Gay,” Him’s older godbrother in the drama. Koo Ming Wah is currently a hot favorite to win Best Supporting Actor at the TVB Anniversary Awards this year.

Him told the press, “Koo Ming Wah is a natural talent. I’ve learned a lot about acting from him, and I feel very safe when I do scenes with him.”

Koo Ming Wah became an overnight sensation with the ongoing broadcast of Divas in Distress, but it did not take him just a few years to do it. Koo Ming Wah joined TVB in 1990. He is an alumnus from The Hong Kong Academy for Performing Arts, and was a member of the Hong Kong Repertory Theatre. Suffering from a poor on-screen career, Koo Ming Wah decided to join TVB’s voice acting team in 2010. With the success of Divas in Distress, Koo Ming Wah may become the next Mak Cheung Ching (麥長青), another late bloomer in the television industry.