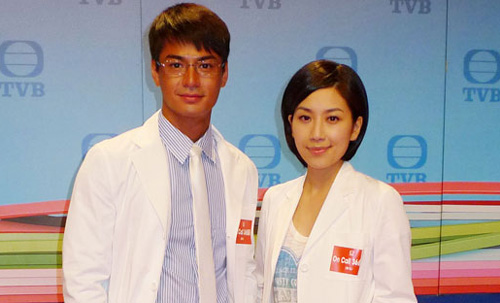 Since their breakout onscreen coupling in Suspects In Love <搜下留情>, Him Law and Mandy Wong, have been regarded as rising talent by TVB. The pair can be seen recently in hit Hong Kong drama, The Hippocratic Crush <On Call 36小時>. With the recent exodus of artists, TVB producers were left scrambling with few actors to work with and forced to deal with last minute cast changes. Raising Him and Mandy to first-line actors would offer more flexibility in casting choices.

Producer Poon Ka Tak’s upcoming romantic comedy, Mother To Mother, will feature Liza Wang and Gigi Wong (黃淑儀). Filming was scheduled to occur in March. Him will portray Liza’s son in the drama. Him promised, “I will make full preparations and be on time for filming. There is a certain degree of stress, but I will treat it as if taking a ‘driving test!'” Mandy thanked Producer Poon for being her talent scout and offering her prominent roles as early as Suspects In Love.

Last year, it was declared that Producer Poon would film a sequel to A Chip Off The Old Block <巴不得爸爸>, even announcing that the name of the sequel would be named, Mother To Mother. At the time, Mr. Poon had announced that the original cast would be featured in the sequel, but a significant amount of time has since elapsed. Thus, it was unclear as to how much of the original cast will be able to partake in Mother To Mother, as well as whether the new drama bore resemblance to earlier leaked details.

Jayne: More Him Law and Mandy Wong! TVB is placing its eggs on promoting Him to greater popularity!