When actor Him Law (羅子溢) and Tavia Yeung (楊茜堯) announced their Chinese name change in 2020, it was widely rumored they did it in the hopes of getting a son. However, the 37-year-old elaborated further on the real motivation for their name change in a recent interview, which they had deliberated intensely over! 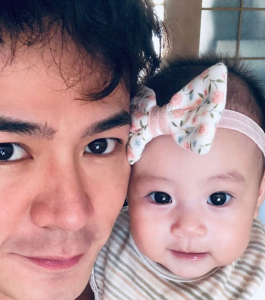 During publicity efforts for Modern Dynasty <家族榮耀>, which he filmed with Tavia, Him was again asked about the couple’s name changes. He explained, “Because we had approached a fengshui master to name our daughter, the master said that if we want our daughter to have a good life, as parents we should also follow suit to create a greater ripple effect, thus we decided to get our names changed as well.”

However, Tavia and Him were initially hesitant to do so since they were already well-known by their Chinese names, Lo Chung Him (羅仲謙) and Yeung Yi (楊怡). He admitted that it was “a real struggle,” but the couple decided to go ahead and “prioritize our daughter’s happiness.” Him understood how it seems like he did a name change in hopes of having a son, but said “that is actually not the case.”

Did Not Intentionally Hide Baby No. 2

Many were surprised when Tavia announced the arrival of her second child, a boy in December 2021, but Him revealed they did not intentionally keep the news under wrap. Many school parents and friends were actually aware of the pregnancy, as they had continued to send Hera to and from school, as they did all along.

Chatting about how he first fell in love with Tavia, Him said he had been greatly attracted by her “independent personality, mature and opinionated character, and persevering charm” from the beginning. Getting along comfortably also became another pull factor that encouraged Him to start courting Tavia, despite their five-year age gap.

Revealing that they had agreed to start co-habiting to test out their compatibility before marriage, Him was thrilled to realize that they matched well in terms of both personality and lifestyle habits, and the rest was history!